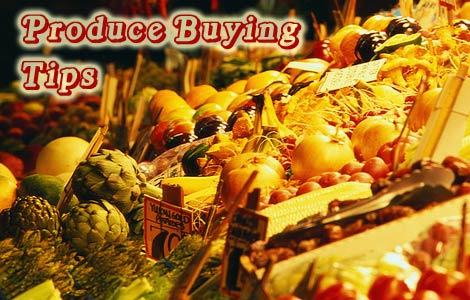 Jim here... I'd like to mainly talk about organics today, but thought I'd wrap that subject into a longer, rather quirky piece on ranking produce on some sort of a scale that would indicate how awesome (or awful) it is. See what you think...

Have you ever thought of arranging produce into a sort of "heirarchy of quality"? Well, I'm not going to attempt to do that here, but I would like to discuss the concept for a moment in order to at least explain what I'm getting at. While I've not yet attempted to do this exercise, I nonetheless occasionally envision a large chart or something that conveys my feelings about how I personally rank the quality of fruits and vegetables I put into my body. This all probably sounds vague, so let me share some examples.

Imagine that you were given the task of assigning a numerical ranking to a vegetable or a piece of fruit. This ranking, say on a scale from 0 to 100 (100 being the best), would indicate the quality of that produce. What qualities of that fruit or vegetable would you consider ? Here are some of my own suggestions:

Freshness / Ripeness. Obviously, where produce is concerned, the rule is generally "the fresher the better." I think this is especially true for vegetables as compared with fruits, as many fruits need some time to ripen once picked (e.g., bananas). So, if I were building a chart to rank the quality of fruits and veggies I eat, "freshness" would definitely be one axis. Or, perhaps I'd name this axis "ripeness," which would allow me to rank fruits and vegetables together.

So, a truly ripe banana sitting on my counter today would rank high in this category, even though it was picked in, say, Ecuador, a week ago. Likewise, a head of romaine lettuce picked five minutes ago from my backyard garden would also rank perfectly on the freshness scale. Store-bought would, by definition, almost always rank lower. And anything over-ripe or slightly browned would rank even lower.

I suppose frozen fruits would rank lower as well, acknowledging that the freezing process lowers the nutritional content somewhat. In general, by the way (since this is a produce buying feature article), we feel it is fine to eat frozen fruits, but we recommend that you do not purchase frozen vegetables since they are generally parboiled prior to freezing, rendering them non-raw.

Similarly, dehydrated produce may rank slightly lower than fresh, at least as long as the dehydration was done at the right temperature. Some people cite 105 degrees fahrenheit, others 108 degrees, others 118 degrees, and still others claim that even higher dehydration temperatures don't matter so much within the first hour or so of the dehydration process (after which you would turn it down to whatever you believe the critical enzyme-conserving temperature is). In my experience, I like to err on the cooler side, so I often leave our dehydrator set on 105, which always works fine for me. It's probably not worth obsessing over, but it is interesting to note the varying opinions regarding temperature.

Local.? A second axis or criterion might be local vs. non-local. As we discussed in the first installment of Produce Buying Tips, there are many great benefits for buying local. Chief among them, as far as nutrition is concerned, would be the freshness aspect described above. Most of the other benefits are not directly related to nutrition; rather, they cater to our natural affinity with the environmental movement (e.g., less shipping, less packaging, etc.).Still, one might be tempted to score certain foods higher when sourced locally. Personally, I would not hold the fact that a banana is Hawaiian against it. After all, Pennsylvania (our current home) has no banana crop. But, I'd certainly feel that a locally grown head of romaine would far surpass a trucked-in one, and would rank that local head higher.

Organic vs. "Conventional."? Last but definitely not least, we come to the final axis in our imaginary quest to rank all produce via some sort of universal scoring system. I imagine two ways to approach this. First, the short-question approach:? "Is it organic "? In this simple yet practical appraoah, a "yes" ranks higher than a "no" always.

However our ranking system would ultimately be set up, I think it would have to be weighted so that organic is perhaps the most important factor. In other words, an organic head of lettuce trucked in from 2,000 miles away would be of a higher quality than a locally farmed conventional head of lettuce, and thus should rank higher.

Yet I have to admit just a bit of lingering personal ambivalence here. I've changed my opinion a lot over the years, moving more and more in the direction of "organic only" in recent times. At first, I would eat any fruits or vegetables, regardless of whether they were "conventionally" grown or organically grown. But, the more I've learned about pesticides and their link to chronic disease/illness, the more I've gravitated toward organics.

Also, I have to acknowledge that my taste buds have changed since going raw. I'm now unable to enjoy a conventional apple, for example. (I can tell the difference.)

Yet, I admittedly still cringe at the organic prices sometimes. So, here's where we're at now: Wendi eats exclusively organics. (Besides being opposed to pesticide use, she's always also been able to distinguish the difference in taste.) I eat mostly organic, but will eat conventional either (1) when I'm out (for example, at a lunch meeting or a raw food potluck), or (2) when I feel that the pesticide risk is low.

So, how do I know what the pesticide risk is ? Well, according to some guides prouced by The Organic Center and FoodNews.org, it's fairly easy to know what to avoid at all costs and what you may be comfortable eating from time to time. According to both of those guides, the worst of the worst (produce to avoid at all costs, if conventionally grown) would include apples, peaches, bell peppers, celery, nectarines, strawberries, cherries, lettuce, grapes, carrots, and pears. FoodNews also singles out kale as high-risk, while the Organic Center's no-no list also includes cranberries, green beans, cantaloupe, cucumbers, tomatoes, potatoes, peas, and broccoli.

You're probably screaming, "What's left ??!!!" Well, lower-exposure crops reportedly include onions, avocados, pineapples, mangoes, asparagus, kiwi, cabbage, eggplant, papaya, and watermelon. So, I'll quite often eat those, as they're easier on my pocket book and pose a lower risk. (Still, of course, an organic watermelon would be preferable to me.) A few other items never seem available in organic varieties where I live (grapefruit, for example), so I do buy those from time to time as well.

Oh sure, there are probably some other criteria you might use in your personal ranking system (not that you or I will ever likely take this exercise any further). You could probably add a category for overall nutrition, vitamin content, toxic components, maybe fat content. But, the above would at least be a good start.

This morning Wendi made blended cantaloupe shakes for breakfast. Let's see how she did:

Local:? Not local, but also not a generally available crop locally. Again, 90/100.

So, that's 280/300, for a final averaged score of 93%. Not bad, Wendi! (But, it was 100% tasty!) In the end, even though it was fun to write up and offered a structure within which cover some information, perhaps a ranking system is ultimately rather useless. Reminds me of a quote, in fact, with which I'll leave you:

"We're talking about poetry. How can you describe? poetry like American Bandstand? 'I like Byron, I give him a 42 but I can't dance to it!' " ~John Keating in "Dead Poet's Society"

Love it! Great article, Jim. I do try to buy more organic produce, but it's SO expensive here ($3 for a small head of lettuce etc) that I really try to grow my greens in my backyard as soon as it's warm again. I feel that it offsets the price of the organic greens in the winter.

Both great articles Jim on the produce buying. Thanks!
And I love the comment from Joanna - we believe that is true about offsetting costs.
Now that we do not have cocktails or drink much wine at all, buying our superfoods and organic produce is cheap! Our grocery bill now is so much less than this time last year and we're the healthier for it! :)

Wow, Joanna... You know, that's one of the main reasons we're heading to a warmer climate -- for a year-round growing season! BTW, how are the farmers markets in Iowa? Seems like real farm country there. Once we get out west, I'm sure we'll do a lot more on this blog about organic gardening, biodynamics, etc.

Thanks, Sheila. That's an excellent point about organics being even more affordable when you're no longer spending money on junk food, processed foods, alcohol, etc.