Mnemonic for the "Dirty Dozen" Foods that You Should Only Buy if Organic!

While we believe that organic is always best, there nonetheless are times when most of us (for whatever reason) consider purchasing or consuming conventionally grown (meaning "sprayed with pesticides") produce.

So, it's good to commit these lists to memory -- and we're going to share a super-easy way to do that! Today, let's conquer the Dirty Dozen. These are the absolute worse, most pesticide-laden food items you can buy. So, obviously, you pretty much never want to eat any of the following, unless they're organic: 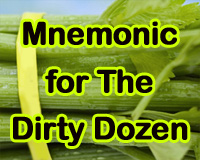 Okay, so how can you remember these--Well, you probably already know most of them. ?So, step one is to just read the list a few times.

It also couldn't hurt to put together a mnemonic device, such as a sentence to remind you of the items. If there's one thing everyone hangs on to from grade school, it's: "My Very Elegant Mother Just Served Us Nine Pies" (for remembering the planets, in order), right?

So, since we're also going to be doing this tomorrow for the "good guys," let's try to come up with something rather negative in tone here, to help us remember that our sentence will be reminding us of the Dirty Dozen. (Tomorrow's sentence can be upbeat for the Clean 15.) ?Okay, here's my best shot:

So, now when you're grocery shopping and you need to remember what to avoid if it's not organic, simply repeat to yourself: "Corporate Pesticides Scare Away Beautiful Nature...Bad Science Carelessly Kills Pretty Greens." That should help you remember to avoid nonorganic Celery, Peaches, Strawberries, Apples, Blueberries, Nectarines, Bell Peppers, Spinach, Cherries, Kale and Collard Greens, Potatoes, and Grapes!

Well, it's a starting point. :-) Feel free to suggest alternatives here in the comments, or on Facebook. Tomorrow we'll return with the Clean 15 -- and, you guessed it, another mnemonic device.

I never heard the "my very elegant mother" one :D but I do remember the biological classification system using the mnemonic "king philip came over from germany saturday" (not that it comes up much in conversation LOL) - here's the thing... I thought the dirty dozen list was updated annually, with different results? So when it comes out again next year, I need a new sentence to memorize... and there's not so much room left in my brain. This could potentially displace the theme song from the Patty Duke show...

Did you ever learn, "Every Good Boy Does Fine"? (These days, it's often, "Empty [the] Garbage Before Dad Freaks.")

BTW, I'm not sure about the yearly updates. So, yeah, that could be a small issue. the best and worst ones don't change much, though, as I always remember the worst ones, and they're still there.

:D had to look that one up - I'd heard it, but couldn't remember from where. Turns out it's just because I was an unmusical child...

The one on there I can't do is bell peppers (and I eat them just about daily, too)... I *know* they make the list every year, but at $5-$6 a pound, it's just not affordable to get the organic :( I've tried growing my own, but my gardening ability is right up there with my musical ability

I have a question that I hope you will not consider to be to stupid, but I can't figure it out. Since potatoes are grown in the ground, how does the pesticides get on them? I have grown potatoes before in my garden and I just assumed that when I bought them in the store that they would be free of pesticides. I'm guessing most people would probably think they would be on the clean list instead of the top 12 dirty list. I can definitely see things such as peaches and blueberries on the dirty list but I can't figure out potatoes.

Sure... there are actually a few answers to this question. The first is that the pesticides are sprayed onto the plants and surrounding soil, thus easily soaking into the soil over time (after rains, etc), which exposes the tubers to the chemicals. Everything sprayed eventually finds its way to the soil and later into the water system -- a highly polluting, unsustainable, and irresponsible system of commercial agriculture.

The second reason is that the pesticides are absorbed into the plant through the leaves (and potatoes are sprayed a lot!), thus exposing the tubers from the inside out. These pesticides are known as systemic pesticides. Here's a basic article on that: http://www.motherearthnews.com/organic-gardening/systemic-pesticides-zm0z10zrog.aspx Nasty stuff!

BTW, here are all of the common pesticides found in "conventional" potatoes, as well as the health implications for each toxin: http://www.whatsonmyfood.org/food.jsp food=PO