Here's an update from Wendi. I think this can be considered, with 99% confidence, the big announcement:

Of course, there's that 1% chance that something unexpected will happen. But, Portland feels right. It always has for us; we nearly moved there in the late 1990s. We had books on Portland back then, and I was buying their newspaper each week to hunt for jobs. It just never panned out, though. I suppose we were meant to live in Pittsburgh for a spell. It would be easy for me to list many reasons why Pittsburgh served a purpose for us. But, yeah, I think we're Portlanders at heart. So much about that city resonates with us. It'll be a homecoming, for sure! I want to reiterate a few things that I'd written in comments recently, slightly clarified in places. 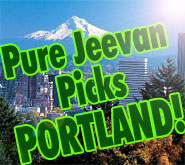 For the record, it's definitely not that Wendi and KDcat didn't like the other cities we explored. In fact, Wendi and KDcat *loved* all of the awesome places they've visited so far! But, we're going for something beyond that, though -- an intuitive feeling that the city is "home." This is in no way meant as a judgment of a town in general (in the sense of it being a "good" or "bad" town) or even a recommendation for others. It's truly a personal kind of reflection: "Do we belong *here*? Is *this* town home " While we based all of our initial research on solely rational methods and various statistics, the goal was always to rely on Wendi's keen intuition for the final decision. We were always fully prepared to be surprised by this -- and we were!

When we approached this strictly on paper, Portland didn't rank quite as high as some of the other towns we were considering. This has been a highly dynamic decisionmaking project, with many, many factors, all of which are working together to help us decide. But among all of these very rational things that can be judged and rated and quantified is the undeniable "vibe" factor, that gut feeling you have when you just know something intuitively, that mysterious pull to follow your heart.

I absolutely beleive that you can go into a town with this intention in mind (asking yourself, "Is this home ") and really tune into that knowledge. If you're jumping up and down with excitement, that's a good thing. If you're not, well, maybe you have to look harder or maybe it's a no.In the end, though, everything we say or write here is absolutely subjective, tailored to that entire aforementioned dynamic equation.

And, we haven't even discussed all of those factors here... For example, there is this new area of research we've been hinting at for a while but haven't yet discussed. After really getting a first-hand feel for the size of some of the smaller cities and towns, we simply feel something more populated will benefit that aspect of our lives more -- and we know that this area of research is our mission at this time. (More on that later on.) Bottom line:? Barring that 1% chance of some other city absolutely blowing Wendi and KDcat away, it's Portland!!!

This announcement is SO exciting! I am just thrilled and I've not even been to Portland.....YET! There is something about the city that speaks to me though...I feel it beckoning. So happy and excited that you are feeling so good about this! Sending much love for continuing safe travels. xoxo...P

Congrratulations! This is timely for me, as I am contemplating a move soon, and searching for clarity about my intended destination. I actually envision a future of much travel, just not yet. I am looking for a place to rest and learn and grow and prepare for my traveling life in the future. I will keep your comments in my heart for contemplation.
I totally get what you are saying about the other towns not being "bad". This idea is also what can be so tough to grasp when a romantic partner chooses to move on to someone else. The one "left behind" is not bad or wrong, and the new partner is not good. So many areas where this idea comes into play. Thanks, again.

come on out, penni!

I've heard so many wonderful things about Portland - I had my eyes set on SF originally, and then I realised that I needed lots of sun, greenery and people living in a connected way that felt meaningful. For me the societal structure is what underpins a good quality of life. I'm glad you found a potential home there!

Ok Kids, but LA may just knock your raw socks off!
Of course, the downsides: traffic, crowding, high cost of living may just make you want to high tail it out of here!
but we love our little city :).. near the big city!
see you soon!
deb

Mmm just this morning I was telling my husband that I didn't want to move to Oregon anymore. The weather today is so gray and drizzly, I can't stand it. I'd rather have bright sunshine and a lot of snow and cold, than warm-ish weather with constant drizzle. Though it has its charm. Sometimes I say it's "Paris weather" and I get nostalgic. But I can't imagine how much omega 3 I'd have to down to go through it. But maybe I'll go visit you guys and change my mind :)

That's wonderful! I think if I wasn't so in love with Denver I'd be in Portland also! *blessings*

That's wonderful! If I wasn't so in love with Denver I think I'd be in Portland also!

i can see portland being a great fit for your family! and thankfully you're only about 50 minutes north of us. you'll be able to come pick berries with us! : )

Portland would be a very good decision. A State with the ocean, mountains, and the National Forests within a 50 mile radius of each other, not to mention no freaking Sales Tax. To protect gas station attendant jobs, no one is allowed to pump their own gas. How nice to have your oil checked when you fill up. Oh yes......Oregon. Need I say more?

Yeah, I'll love all of the natural amenities. But that gas station thing is just *weird* to me. Maybe it's because I've pumped my own gas for 25 years now, but... I mean, to protect *landscaper* jobs, are you not allowed to mow your own lawn? To protect *chef* jobs, are you not allowed to cook your own food? (Um, not that we would, anyway -- lol). That law strikes me as misguided. But, I'll come to love those idiosyncrasies in time, I'm sure. I know Wendi's always hated pumping gas (she's sensitive to the smell of gasoline), so she'll love that one.

OMG, ANY time you want to go berry picking, just drop me a line!!! I'm sure that's one thing I will NEVER tire of, as far as living in Oregon goes. Wendi said they're like weeds there. Seems like easy pickins' for us raw foodie peeps.

Thanks, Terry! I've been to Denver & liked it a lot. I can see how anyone would really love it there. I especially liked the mountainous areas to the west a bit (Boulder, etc.). We strongly considered Denver early on & still think it's a great place. We just feel more drawn to Portland. :-)

From what I understand, it's not a *dreary* kind of rain there -- and it's not constant like it sometimes is in Pittsburgh. Yeah, you guys'll have to come out & visit. I'll stock up on walnuts -- lots o' good Omega 3s for you.

BTW, you reminded me of a favorite joke: Why does Snoop Dog carry an umbrella?

It may, Debbie! I only said we're 99% sure. So, there's always that 1% chance that something unexpected will happen. :-) I'm sure when they find themselves having so much sunny fun with you & the L.A. raw peeps, the thought will at least cross their minds.

There were definitely considerations given to San Fran -- and, in fact, Wendi and KDcat are in San Francisco today as I write this! -- but we felt that city was probably going to be too costly for us. I think that was our main "objection." But, I know Wendi and KDcat are having a grand time there! :-)

Thanks, Mindy! Sounds like you have a vision for your future, so I encourage you to pursue it! Take action now and go for it! :-)

I've never been ther, either!!! But, I just know I'll love it. As I said, we nearly moved there in '97. How exciting to move cross-country!!

Well, PDX isn't quite Seattle but it's close enough. ;) Very cool that you chose Portland. And hey, you'll only be "down the road" from us and Bitt so I sense future get-togethers!