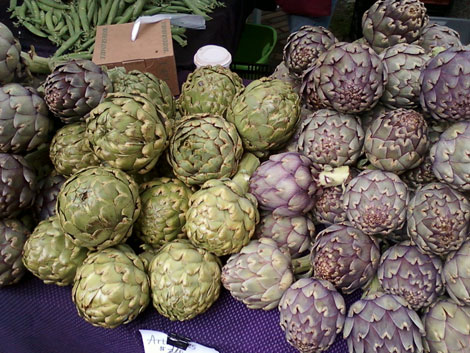 These days, I'll eat a steamed artichoke again, if given a chance. ?(I see them now and again on nicer salad bars, and usually toss a few onto my salad.) But, you can certainly enjoy them raw as well. I recall seeing them on the menu at Borrowed Earth Cafe (a raw restaurant) in Chicago. Kathy and Danny Living (owners of Borrowed Earth) have an insanely delicious spinach and artichoke dip there, which we highly recommend.

While searching for that Italian word (which still eludes me), I happened across a raw artichoke recipe that I thought I'd post here, as well. It's for an Italian Artichoke Salad, on a site called the Daily Dietribe. Looks pretty good to me!

Thanks for linking up to my salad! I hope you enjoy it!