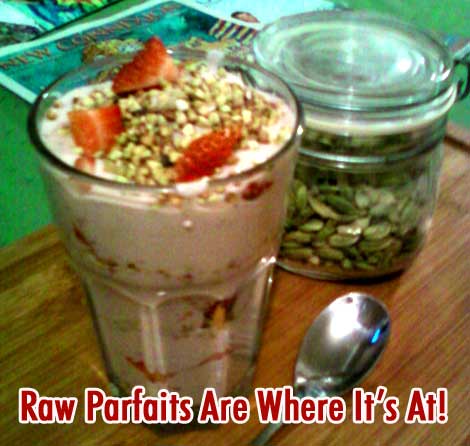 Above is a quick camera-phone pic I posted to our Facebook group lately. I did talk about making raw parfaits on that page, but want to talk a little more about them today, as it's just the perfect time to be talking about delicious raw parfaits (at least here in America, in any case, where many of the fresh berries you'll probably want are cheap and in season). I'll share a brief story about them, and then share my own basic recipe, and then we'll make some plans for MORE parfait talk really soon, okay?

I'm almost hesitant to talk about raw food parfaits here because, well, if the government found out how unbelievably healthy and ENJOYABLE parfaits are, I'm sure they'd make them illegal. But, I'll take a chance...

So, after we moved to Portland, I discovered that the leading local raw restaurant (Blossoming Lotus) offered some raw packaged foods for sale at co-ops around town. We began buying their parfait quite regularly. They're simply divine -- and I enjoyed them to the point of our food budget straining a bit. So, eventually, I thought, "Hey, this isn't rocket science... Make your own!" 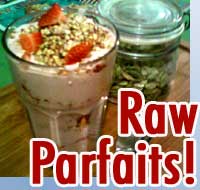 Actually, a parfait isn't so much different than a few other things you may already enjoy. But, it has a few special things going for it that, for some odd reason, just fill me with unending delight. For one, it's called a "parfait" -- which is fun. It seems like a dessert or something, right?

Second, it's customarily served in some sort of tall glass or similar container. This is because, in most cases, a parfait is a vertical, layered recipe -- and so it's a best practice in terms of presentation to show off the layers as best you can.

In general, a parfait will have three components (as far as I can tell, anyway):

After that, it's all about variations, style, and personal ingenuity. ?So, let's tackle those three items, above, in a bit more detail.

The Fruit: Okay, this one's ridiculously easy: ?Get some fruit, and chop it up into small, bite-sized pieces. I've found that a nice mixture of fruit is palatable -- apples, strawberries, blueberries, raspberries, pears, blackberries, bananas, etc. Again, there are no rules here, so I've found it's best to stick with whatever is in season near you. That'll be the freshest and cheapest. (And, by the way, since the in-season fruit is always changing, you can use this same basic recipe all year round and still experience amazing variety!)

The cream: This is where things really get interesting because you've got a TON of options to achieve a huge variety of tastes, textures, colors, and even fat-contents (low to high). I'm going to tell you right here and now: As soon as our kitchen is video-ready, I'm going to have a full-on "Parfait Week" here on Pure Jeevan. So, watch out for some great vids on that topic. ?But, for now, let me just share a very basic recipe that I've found tasty and easy:

Begin to blend, and keep one or two bananas on hand as it blends. ?Toss in the bananas until it looks super-creamy. And, make sure to blend it thoroughly, as you'll probably like a nice, smooth cream. Now, most creams will ideally be left to thicken in the fridge for a while. But, I'm just not that patient in the morning. This is why I recommend the frozen strawberries and (fresh or frozen) bananas -- both of which really help add creaminess immediately.

But, if you're patient, you could well try making your own and refrigerating the mixture for an hour or two. There are certainly many other options for attaining creaminess (such as trying chia or Irish moss, or maybe avocado). ?One thing I've found that also helps is a bit of protein powder.Remember: You can change up *anything* in the above recipe. So, the possibilities are easily in the billions.

Okay, so you've got your fruit and cream. It's time for the crunchy stuff: ?Here's where you can split things off into either a 100% raw dish to maybe downshift to a high-raw one. The local raw restaurant uses sprouted, dehydrated buckwheat as their crunchy element (also adding, I've noted, some pepitos -- which also tastes good). I'd love to do that, too, as my first preference. However, our kitchen is not yet fully functional (the dehydrator still sadly packed away).

I've tried roasted buckwheat (available at my local grocer), but it didn't taste very good to me. ?Plain old oatmeal, though, tasted about right, as did some meusli I tossed into one once. I imagine there are a hundred things that would probably taste prett good, and still clock in as at least very high-raw and generally healthy.

The final step is the layering: Spoon in some of the fruit, then a layer of the cream, and then some crunchy stuff. Repeat until you've filled the serving glass.

Did I leave off anything important ?? Please let me know. :-)

(BTW, we selected this post to be featured on our blog s page at Raw Food Blogs.)

Yeah.. leave some for ME. That's important.

I can't wait to try this. I'm wondering whether I can make the cream with pine nuts.