In writing and researching our previous two posts, we came across a number of articles mentioning the benefits of chlorophyll for those who have been exposed to radiation. Nothing seemed to go so far as to call chlorophyll a cure-all. But, many sources cited clear benefits -- and it's great to read about potential preventative measures and treatments available through natural means. For example, the best source we found mentioned some specific studies:

"Scientific research has confirmed many naturopaths' perceptions that chlorophyll-rich foods decrease radiation toxicity. In 1950, Lovrou and Lartigue reported that green cabbage increased the resistance of guinea pigs to radiation. Further studies by Duplan with green cabbage in 1953 confirmed Lovrou's findings. In 1959 and 1961, the chief of the U.S. Army Nutrition Branch in Chicago found that broccoli, green cabbage and alfalfa reduced the effect of radiation on guinea pigs by 50%." Vegetarian Times, December 1981. 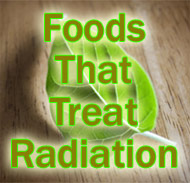 This is wonderful information for general knowledge, but equally important to consider would be a discussion as to *why* chlorophyll-rich foods are so effective.

The answer is that these plants -- mainly the large, leafy greens -- serve as *natural cleansers of the environment*. So, they're of course also great for cleansing the body (because the body is also an environment).

That 30-year-old article goes on to list many food items known to be be protective from radiation and/or helpful for treating radiation exposure. We wanted to share the list of these foods so that you can research any that intrigue you. (And, we're sure that this list is not comprehensive in nature, so further research is suggested.) ?After the list, we'll conclude with a few important considerations.

You can find this excellent article, written by Steve Schechter, N.D., online as a scanned article at this link. For each item, above, the piece gives scientific studies and in-depth discussion. The article may be roughly 30 years old now, but unfortunately is more relevant than ever and can serve as a particularly great starting point to help identify updated research on this topic. (Sometimes, you have to look far into the past to find information helpful today.)

Finally, it's important to offer a final word of precaution before anyone starts consuming massive amounts of greens or other foods in order to stave off any effects of exposure you feel you've had or might have. You see, at the moment, these greens and many other foods listed above are *already very busy cleansing our environment* -- and thus are now absorbing ambient radiation from the nuclear incidents in Japan. This explains why we've seen advisories against consuming too many broad, leafy greens in the near-term.

Since greens are the bottom of the food chain for dairy and animal products, this also explains why increased levels of radiation have been reported in those products as well. So, you can't just read a list stating that chard treats radiation, and then start mega-dosing on chard. You may be making things worse for yourself!

In any case, more and more literature and guidance is coming online these days regarding radiation exposure, food safety, and natural treatment / preventative options. So, this isn't meant to be a comprehensive article on all of that. Rather, it's meant to point out a super starting point that we found for doing your own research, plus mentioning ?that last important precaution.