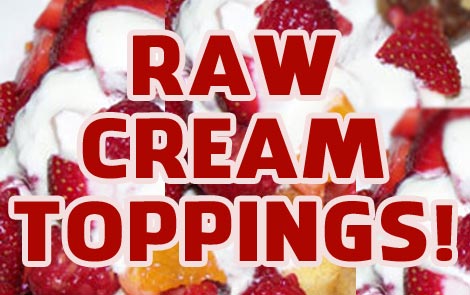 While I was growing up in the Midwest, I had a rich uncle who lived out East in Philadelphia. I didn't know him very well at the time, but would often glean stories via the family grape vines of his business successes. After high school, I attended college in Northeastern Pennsylvania -- Wilkes University -- where, incidentally, I first met Wendi! :-)

Being out there, I got to visit my uncle from time to time, and dine with him and his family. ?Among other things, he was quite the gourmand. I'm not so sure what he'd have thought of raw foods, although I suspect he'd have appreciated the many gourmet efforts.

His wife, my aunt, was from Ireland. She and her elderly mother lived there in Philadelphia, too -- all at the palatial estate. Usually, for dessert, they liked to have a pie of some sort. But, quite to my surprise as a young student, they served it topped not with ice cream or whipped cream, but with liquid cream. It seemed strange to me, but I came to appreciate that perhaps not everyone in the world does things that we do in America -- and vice versa. So, to date, I'm aware of at least three major ways in which pie is topped (ice cream, whipped cream, and liquid cream). We'll cover two of those today!

Both of the following recipes are imitations of things that are dairy -- and so both will demonstrate how dairy-like you can get using various ingredients.

This will be the lower-fat option, as it uses only fruit! Making super-tasty raw ice cream is SO easy; all you need to do to achieve a basic ice cream is freeze a few bananas, and then run them through a masticating juicer such as a Champion brand one (which is what we have). Doing this makes a delicious, creamy ice cream -- and you can also add other frozen fruits in to flavor the ice cream. If you do not own a masticating juicer, you can achieve some nice, thick ice-cream-like concoctions by experimenting with your high-speed blender. Just toss in frozen bananas, and some liquid of your choice (and, likely, some sweetener). This won't be quite as thick or ice-cream-like as it would be from a masticating juicer, but it'll surely taste pretty good.

The following recipe is one of thousands of possible cream recipes. It's directly from our free Raw Recipes book that we give away to all who sign up on our web site. This one is called "lemony cream":

Blend until very creamy, and then spoon onto your raw pie!! SO delicious!

Sadly, I don't have an excellent raw whipped cream recipe to share at the moment, but I'll look into it for you -- and I'd encourage you to do the same. (Looking in the All Raw Directory is a great start, of course.)

So, there you have it -- a universal pie recipe yesterday, and starting points for some delicious toppings, above.