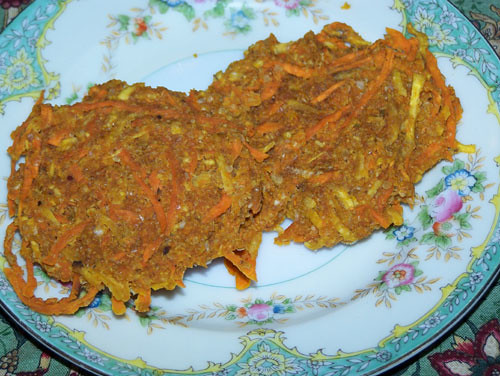 In the next day, or two, I'm going to type up the recipe and send it out to all of our subscribers. So, if you haven't signed up recently for either our newsletter or the two free eBooks, do it soon! In addition to the potato pancakes recipe, I'm going to share another amazing recipe I created for Jim's birthday this past weekend: Raw Vegan Ice Cream Cake!! YUM! 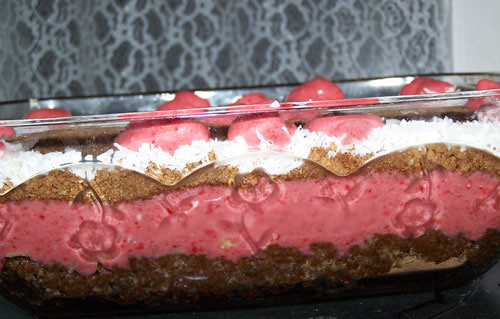 They look great, Wendi! I can't wait to see what you did with the recipe!
I have to say...I love your recipe ebook! It was so much fun reading through it, because it was so YOU! I've have some of those dishes at your house, and reading through the book made me think of you and remember those delicious meals. Thanks!
~ Melissa

I'll be typing up the recipes really soon to share with our readers! :-)

That makes me feel so good knowing that the eBook means so much to you! I
hope you like the recipes just as much when you create them yourself!

Yes! I can't wait! Those look amazing. Even though I just ate, somehow I'm hungry again!

I know! I've been craving them like crazy. I walk around mumbling, "I wish
we had some raw potato pancakes. I wish we had potato pancakes." I'm
thinking this probably isn't a very good food to eat if I'm craving it so
much! It doesn't feel like a healthy craving, either--it feels like one of
those belly-hurts-from-eating-too-much-but-can't-stop cravings. LOL

I hope you make them and let me know what you think!

OMG, I cant wait for the recipe!!! They BOTH look flipping incredible! :D

They ARE both incredible, Anarare!! I hope everyone else thinks so, too!

Since I can't apply for that dream job, I hope you guys get it!

I'm done typing them all up, now we'll format them nice and pretty when we
have some time and send them out to everyone. :-) I made the potato
pancakes again last night and they are gone already. YUM!

Thanks for saying you hope we get the dream job!!! I hope we do, too!!

I can't wait for those recipes. I've been playing in the kitchen more lately, and the food has actually been turning out good!
Good luck on the dream job!
XO
P.Lis

We formattted it and sent it out, but the service that's doing our email
seems to run a bit slow. But, you'll be getting it very soon!!

I love that you are experimenting in the kitchen! That's so important in
eating raw--experiment and come up with the perfect mix of foods your body
is desiring each time!

I've been wondering how you've been. I'm swamped and not able to catch up
with everyone as much as I like. Once we're on the road, I'll have extra
time!! Yay!

Thanks for wishing me luck on the dream job!!!!!

just got the e-books - fantastic love!

can't wait to get the recipe for the potato-cakes...are you sending in an email

Thanks for stopping by and getting the eBooks! I hope you love them!!

Yes, the potato pancake recipe will come in an email to you. It's amazing.
Kevin and Annmarie were just eating them this morning and they're putting
them in their video for today, I think. ;-)

Well, you just might be in BIG trouble! cuz that Ice Cream Cake is soooo good it's probably illegal!

We'll be going to the food co-op this week to pick up some supplies, and we'll be making the sweet potato latkes soon.

Thanks for the wonderful recipes; they're a great addition to your much used and appreciated ebook.

Patty & Denny, you make me smile so big!!! Thanks for your comment!

Let me know what day you'll be at the co-op if you think you'd like to
stop by for a visit. :-) We'd love to see you both!

They tasted great, too!
I'm so happy you've brought so much recognition to this creation! Here was my original post about the latkes (I put up a picture!) also with the recipe for raw applesauce and raw sour cream: http://birchcenter.blogspot.com/2008/12/raw-latkes.html
Love them!
~ Melissa

Yay!! Thanks so much for the original recipe and adding the applesauce and
sour cream ones! I hope everyone goes over to check them out!!

NOTE: This message is waiting for your approval. You may respond with

It's worth waiting for--it's delicious!! If you haven't received it within two days after signing up for the free eBooks. please let me know.

Thanks so much for stopping by our site!

Wow, those look awesome. I saw your interview with Kevin Gianni. I have already signed up for your ebooks and received them. Can't wait to sit and read all your good stuff.
Thanks!

Great, Amy! I'm happy you found our site. I hope you enjoy the eBooks!

I have printed the awesome-looking potato pancake recipe and am looking forward to trying it out. (THANKS FOR SENDING IT!) I have two questions, though:

1) What in the world is asafoetida, and what can I use instead
2) I've never heard of a white sweet potato. Is it important to use that, or could I use a regular white potato instead? Or perhaps just two different kinds of sweet potatoes--whatever can be found? Or even just one kind

I know there is one with yellowish "dry" flesh (my favourite, but hard to find anymore) and one with orange "wet" flesh (which is always available--and properly called yams if I'm not mistaken).

Thanks so much for your help! BTW, I'm AM going to try the ice cream cake, too. My family will LOVE that!

Thanks for your comment and questions. You are very welcome for the
recipes. I am looking forward to hearing what everyone thinks of them!

Here are answers to your questions:

1) Asafoetida is a spice that aids in digestion. It has a taste that is a
bit similar to garlic and onions. The odor of the spice is very strong and
Jim doesn't like the smell. However, it is a wonderful spice and one I
recommend having in your kitchen, especially if you like the flavor of
Indian foods. As for a substitute, maybe some dried onions that have been
powdered would work. You can find asafetida in Indian grocery stores, or
online.

2) No, please don't use regular white potatoes. You can use any kind of
sweet potato that's available (well, any kind of raw one, that is!). You
may even be able to use yams, as well. I'm going to do some quick research
on sweet potatoes and do a blog entry about it in a few minutes. I don't
know much about the differences for the varieties or about what makes a
sweet potato different from a yam. So, I'll find out and let everyone
know.

Yes! Please try the ice cream cake! I want to hear what everyone thinks
about it!

I tried to subcribe but no joy. looking vir the potato pancake urgently

Please send me an email describing the problem with signing up for the
free eBooks. I will forward it to Jim and he will contact you to find out
what is going on. (wendidee @ purejeevan.com)

Just tried the potato pancakes and they are yummy! Worldspice.com is a great site for those that are having a hard time finding the asafoetida. I got one ounce for 5.62 and that included shipping. They are super fast too. Thanks so much for the new recipe!

Amy, I'm so happy you tried and like the potato pancakes! Yay!! We have a
hard time not overeating on them, they are just so yummy.

Thanks for sharing information on where you found asafoetida! I'm sure
it's going to help a lot of people who don't have Asian markets near where
they live.

I don't know why but I have not received the potato pancake recipe. Maybe I don't know where to go to find it. I have emailed twice about it but I am sure that I am looking in the wrong places. Please email me exactly where to go and look for it or send it to me. I have been waiting for it every since your interview with kevin.

If you sent an email longer than one week ago, I did not receive it (or I
already responded to it). If you sent it within the past five days,
however, it will be answered soon. I receive hundreds of emails each day
and it's not easy for me to respond right away, since I like to focus on
each individual email (giving others the respect and attention they
deserve).

If you signed up for the eBooks, the potato pancakes will arrive within
three days after the eBooks are received. It's set on an automatic mailer
to make it easier on us, rather than sending each individual one out.

Thanks for visiting our site and I hope you love the eBooks!

I subscribed months ago but never received a recipe for potato pancakes.I just saw them on Kevin Gianni's show and would really love to try them.Is it possible to get them somehow? Thanks!!

Please let me know if you still have not received the recipe. I want everyone to have the opportunity to enjoy these delicious potato pancakes!!

Hello!
Where can I get this yummy recipe
Thanks!
Valerie Orsoni
http://www.lebootcamp.com

hi wendi~~ im very new to raw dieting and i have no idea what im doing but this pancake sounds very good.. id i don't know how to get the recipe though... i signed up and everything... and how do you get the free ebook too? well thank you for your time!

In order to receive the potato pancake recipe, you need to subscribe to our newsletter. The recipe will be sent within a week, or so, of your subscription.


In order to receive the potato pancake recipe and free ebooks, you need to subscribe to our newsletter. The recipe will be sent within a week, or so, of your subscription.

There are two things to sign up for on our site. The first is for notifications of blog entries. The second is our newsletter with the free recipes and so much more!

This recipe looks like the potato pancakes a Russian lady made for us when we were kids, but I cannot find the recipe. Where can I find this recipe?

So where's the recipe?

I would be interested in trying this recipe soon. Please send me information on how to locate it on your site. Thanks, Pala