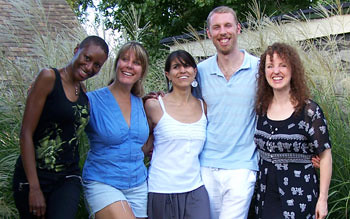 A second highlight is that Kevin and Annmarie Gianni stopped by to visit with us while they were in Pittsburgh. I invited Rawbin and Blaq Berry to join me, so they could also spend some time with Kevin and Annmarie. We all had a lot of fun talking, laughing, and getting to know each other better. Blaq Berry had brought along some durian (an exotic fruit) to taste, so Kevin decided to make the Durian Tasting the topic of his next Renegade Health Show video. He filmed it in our dining room and we all giggled when he became animated during his famous "Good afternoon everyone, this is Kevin Gianni" video introduction!

A third highlight was a transaction that occurred between KDcat and Annmarie Gianni. As many of our readers already know, KDcat is a serious artist. Her work has been featured in various venues quite a few times, and she has been recognized by many for her talent. KDcat has been approached many times to sell one of her pieces, however she never felt comfortable doing so (and never accepted commissions, either, because she doesn't like to part with her creations). 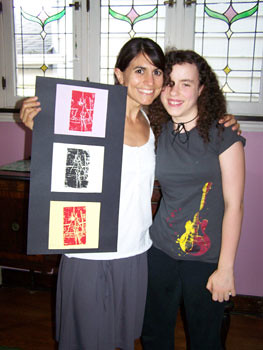 Annmarie and KDcat, after the first official sale of one of KDcat's creations.

She must have felt that Annmarie truly appreciated her talent--they spent a long time together reviewing some of KDcat's work---because she agreed to sell her first piece of art to Annmarie Gianni. I'm sure Annmarie sensed how special this moment was, for both KDcat and herself.

Another highlight is that I was gifted free tickets to the Raw Spirit Festival! My dear friend, Rawbin, heard about some free tickets and knew that I had been wanting to attend so she suggested that I be the recipient! Thanks again, and again, Rawbin! So, my flight is booked and I'll be headed out of town for about a week of immense fun, mixing my energy with that of over a thousand other raw vegans! I can feel the love already!

Thanks for posting these and even better, thanks for having us! We had a blast with everyone! :-)

Oh how fun it must've been in your house at this time! The pics prove it so!

Congrats to KDcat on her first sale! She is an amazing artist (fantastic photographer too).

I know I'm a bit late in wishing you a fun trip but hope it's going so fun for you and the others. Look forward to the stories and pics.

Oh Wendi, wow you have done an amazing job on this!

And can you believe, this is the first time I have been here ?? and seen your incredible before and after shots ??? you are an inspiration, so rawsome girl!

I love it! How fun it that. It was great to see you all together. Congratulation on your daughters success. She's definitely a up-and-coming talent. ;-) I'm truly impressed with Blaq Berry's knowledge of Durian. I first tried it at the GITMR L.A. meet up at Au Lac. It wasn't terrible but I wasn't loving it. I'll have to give it another try.

I'm behind in replies. :-P Jim finally updated my WordPress and installed Disquss, so I should be able to keep up with replies from now on.

I passed along your congratulations to KDcat. :-)