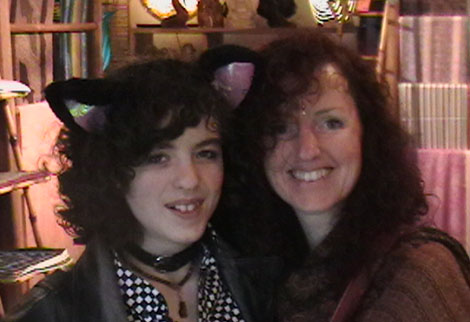 So, after visiting some of the Oregon Coast, W&K headed up to Portland. They arrived in the evening and stayed at the Blue Bird Guest House. While unpacking the car, their Natural Zing snack bag opened up and raw snacks were scattered all over the street. They quickly pushed them out of the road and KDcat put them back into the bag while Wendi snapped a few quick pictures of the madness. The guest house was a nice place, but they really appreciated the comfort and efficiency of the Lion and the Rose Bed and Breakfast's "Victorian Apartment," where they had stayed the very first evening of the trip. Here's the Lion & the Rose B&B: 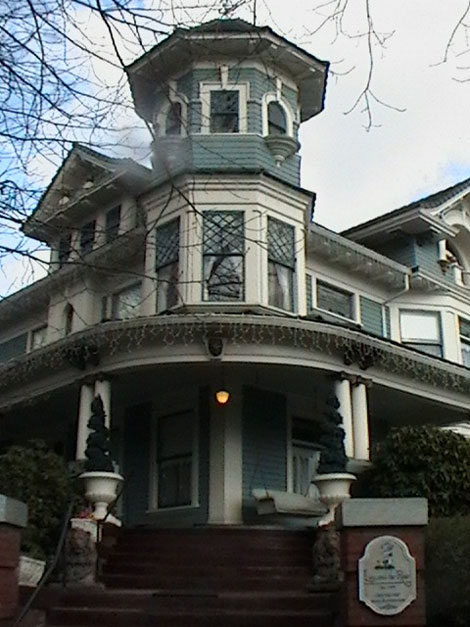 I worked out a deal with the Lion and Rose owners, which allowed us to stay there on a limited budget. The B&B is a gorgeous building, the owners are very welcoming, and the Victorian apartment is exactly what a traveling raw foodist needs (the kitchen is great and has no stove, the space is large, beautiful, and most of all very comfortable). So, for four nights, the pair stayed at the B&B -- heading out each morning for some full days of exploring the city of Portland.

As you may have guessed after seeing our video interview with Wes last week, W&K frequented the Blossoming Lotus vegan restaurant while in Portland. They also visited Papa G's, which also serves organic, vegan foods.

Later in the week, they met with Bill Futrell, a down-to earth realtor who took time to listen to our family's needs / desires for a new home and then showed W&K neighborhoods that fit our lifestyle. (We ran a video interview with Bill on Friday, so scroll down a bit if you didn't see it.) W&K had fallen in love with the neighborhood of Hawthorne, which told Bill a lot about our personalities. From there, he was able to show them all around the areas similar in style/vibe and also meet our needs. We narrowed the city down into certain neighborhoods we'd consider for our new home and from there W&K checked out a few of the places currently up for sale. Bill is a super sweet guy and is going to work on finding the most ideal place for Pure Jeevan.

So, not only have we identified Portland as our new home town, but W&K both fell in love with the Hawthorne neighborhood for many reasons, most of all because it has a great, comfortable feeling to it. KDcat loved the unique shops along Hawthorn Blvd., and the homes surrounding the neighborhood are absolutely adorable , bright, cheerful, and fun! We're going to try our hardest to find a place that works for us in this neighborhood and some others nearby as well.

While in Portland, W&K did a lot of driving around. However, there is an incredible public transportation system there. The buses are green (run on clean fuel), there is a train that can get you just about anywhere in the city (and is mostly free to ride), and it's easy to walk and bike everywhere.

W&K seemed to like Portland's tree-lined streets the most. They said it's very beautiful and charming, giving off a fresh feeling that isn't usually found in a city. They checked out Mount Tabor, which is supposedly a vent for a volcano, and took some neat pictures and videos while there. We all feel so much more at peace when with trees, so they said their Mt. Tabor visit was a nice break from all the exploring they'd been doing. On the way out of the park, they found a playground with a teeter-totter and KDcat insisted that they check it out. (In our area of Pittsburgh, the teeter-totters are taken down because they are considered unsafe.) They had great fun playing on them, taking pictures and videos, and mostly just playing and talking while enjoying the beautiful day. Here's a view of Portland from Mt. Tabor: 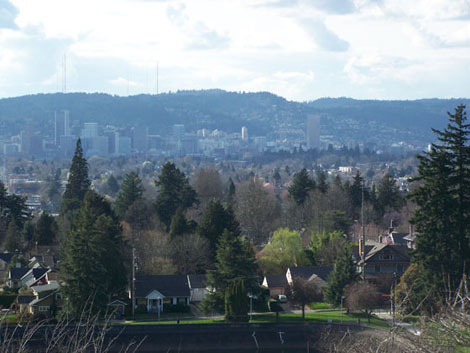 One day they were driving past a park and a young man was learning to walk on a tight rope. They pulled over and asked if he minded them taking pictures. Wenid said he was cool with it and his wife liked the idea that the pictures would be up on our blog. Wendi said he was pretty talented and it was fun to watch him. Maybe one day we'll all try that, too! Here's his pic: 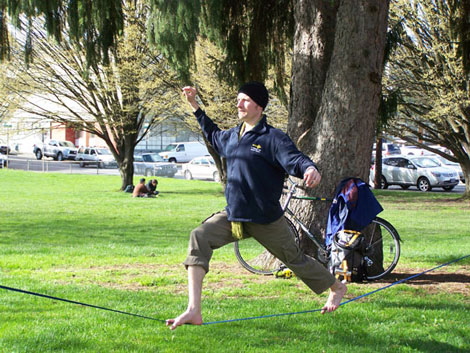 No matter where the pair went, there was beauty everywhere (and dogs and cats -- which KDcat loved). Wendi said that Portland is one of the most beautiful cities she's ever seen. The weather was fantastic, even on the days it was overcast and raining! She said it felt great to be in the city -- it felt like home.

On their way out of our soon-to-be new home tow, W&K stopped by the People's food coop to stock up for the trip down to Grants Pass. Outside the coop is a cute little juice/smoothie store on wheels. Wendi ordered a juice and interviewed the owner, which you'll see in the video below along with some brief footage of the raw snack section inside People's. Here's Brian Heck, the juice bar owner: 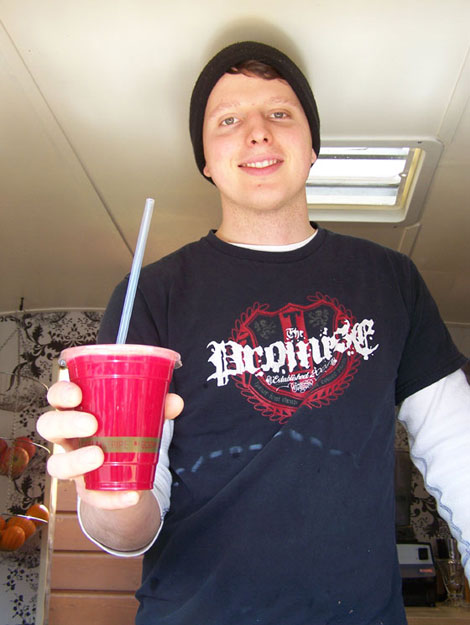 Wendi said their snacks from our official snack sponsor, Natural Zing, are already running low. They didn't realize how quickly they'd be going through everything, especially the sweeter snacks. So, she was happy to find the raw food section there. She noted that the coconut macaroons available there (which we'd never seen before) were particularly delicious! I also included a brief video she sent about something that's tough to find in Portland. Here are all of those videos:

Save your glass bottles, 'cause we can get you some spring water here too.

And if you or Natural Zing need to ship some more supplies for the trip, Wendi and KDcat will be here next week if you want to ship them to my place. You have my address.

Wendy,
The Lion and the Rose B & B was something accidentally my hubby and I past on Saturday March 13th .We went to Blossoming Lotus and I love eating there when in Portland.I just thought that seeing this B& B on your site knowing we past it on a car ride was interesting.I am glad you are enjoying the Pacific Northwest.~Dianne

i forgot to tell you to make sure you tried bishop's best ice cream which is made in portland! it's all raw. hopefully you found it anyhow. well if you move there you can load up. :-)

This has been a lot of fun following along with your trip - what an adventure!

I know I sound like a broken record - but we've lived several different places in the US and find the beautiful Pacific Northwest is where our hearts are! (We're 4 hours east of Portland - in the desert).

AWESOME! I love PDX! So happy for you guys!