Aren't these videos wonderful? Today we have yet another special Raw Spirit interview for you -- the mega-talented Markus Rothkranz. What can I say about Markus? He's a true inspiration, a man who truly lives by his heart and inspires thousands of others on a daily basis. He's actually very tough to interview because he's so interesting and self-actualized, you really just want to hang and chat with him (but then you remember that you're on film and you should probably get back to asking questions that people will appreciate).

Markus gave a great talk just prior to our interview, and made several points that resonated with me personally -- topics such as the way fear pervades our world and why it's best to live more intuitively, following your heart as much as possible. I've always held some strong personal views about the way that people tend to limit themselves in this life (perhaps from having spent way too long in the corporate world). Markus is not one of those people. I get the sense that he gets up each morning and truly basks in his limitlessness. And we're all similarly capable, in my view. You just have to shed that fear that is sold to you at a young age, and then take action on your passions. Yes, YOU can do anything you put your mind to! And if you're doing that AND living a life in true accordance with your conscience... well, WOW!

So, in this video, we cover some interesting ground. For example, anyone want to venture a guess as to how many domain names he owns? (I used to feel a bit overextended at my own statistic -- 25 at last count. But Markus has taken that to a whole new extreme!)? He also covers some interesting observations regarding being high raw versus 100% raw. And then we have a nice foray into quantum physics to round out the interview. 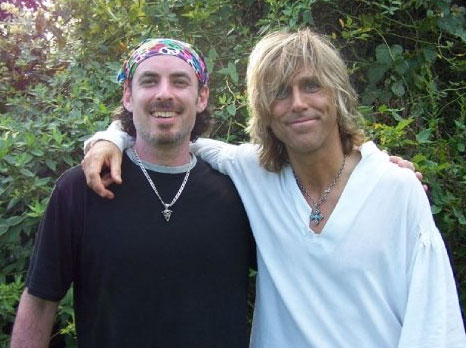 To learn more about Markus, visit any of these sites:

ps Oh, and a huge thanks to Tina Pruitt Campbell for filming this. Tina's blog is TinaInThePink.blogspot.com.

Hi Jim! Ah, you are too kind for the credits (thanks pal)...I must say, Markus was tough to keep in the frame as his energy is boundless ~ hey, we love you Markus!

I could've listened to him for hours....

Raw food contains a high nutritive value. Everyone should take it & add in their diet.

Top Lies: Lyme's Disease is caused by a spirochete bacteria or a Tick bite.

Once again this is medical science at its best trying to keep the germ and infection theory alive. There is NO bacteria or spirochete bacteria that causes Lyme's Dis-ease. Lyme's dis-ease is nothing more than the blood trying to purify itself from excess metabolic and/or dietary acid by removing these acids out into the colloidal connective tissues. Simply put Lyme's dis-ease is nothing more than a person who is adsorbing and absorbing their own urine into the colloidal connective tissues. The irritation and inflammation and then degeneration one feels is all caused by dietary and/or metabolic acid that has NOT been properly eliminated through the four channels of elimination - urination, perspiration, defecation and respiration. My recommendation for so-called Lyme's Dis-ease is an alkaline lifestyle and diet with at least 2 hours of exercise daily. In other words "get off you fat or skinny ac-id! and Go To Health!"

I'd deleted the above comment initially, however I've reinstated it in order to reply briefly to this bit of misinformation. First, this comment clearly does not belong on this particular post. I'm not sure how (or even if) we're able to move it to any of our posts on Lyme Disease. We suspect what happened here is the following: This person was (1) trolling the Internet looking for various mentions of Lyme Disease, (2) found a link to this blog (since we have in fact discussed it here recently), and then (3) simply posted this boilerplate "there is no Lyme Disease, it's an acid issue" message here for everyone to read (on a blog, ironically, that advocates perhaps the most alkalizing diet and lifestlye known). So, clearly this person has some sort of agenda beyond helping Wendi (or anyone) deal with Lyme. While the *diagnosis* of Lyme is indeed controversial, there is in fact *overwhelming* evidence supporting the existence of the disease itself. As such, advising people to ignore tick bites (when a connection between them and Lyme has been so clearly established in medical literature) is irresponsible at best and, in my opinion, potentially *significantly* harmful.

Markus just has a good vibe about him.. and lol at his 800 domain names. He's a selfless guy, offering his help to others JUST BECAUSE HE CAN. Listen to his advice -- we've got to get back to living how we're supposed to live, not our modern lifestyle that is at odds with the natural world.