Japanese Knotweed Not Weed After All 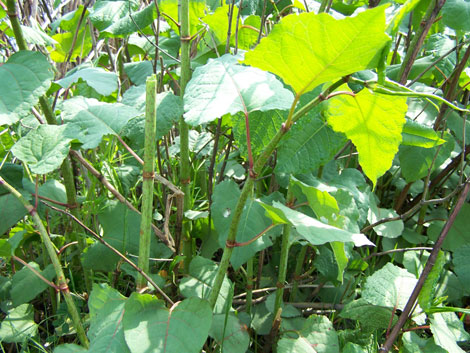 Jim here... Wow, it's Monday, April 27! Let's do something different today: Let's celebrate Monday instead of bemoaning this day that represents the taditional start of the dreaded work week. Why? Because it's our sincere hope that whatever you do in your work week is a labor of love. And, if you're not quite there yet, then celebrate the fact that you WILL be there sometime soon. For us, it means another week of working to inspire you to achieve optimal health -- and that's not "work" at all; it's actually FUN!

So, without further adieu, let's jump into this week's fun. Our good friends Melissa and Dave Sokulski have launched a site recently called FoodUnderFoot ("unleash the energy of wild edibles"). Even in it's young seedling state, I think it's already a fascinating site, and promises to become an encyclopedic web destination for anyone interested in foraging wild edibles. So, check them out for some informative info and valuable freebies, too!

Part of their local offerings include wild edible walks, in which people gather at local parks and Melissa & Dave walk the group around identifying various edible goodies here and there. It's incredible how much there is to eat out there right under our feet! We went on such a walk yesterday, and wanted to give you an example of the kind of incredible information Melissa and Dave are teaching.

I knew a bit about the burdock and mugwort they showed us (from previous walks of theirs). But, learning about Japanese Knotweed was a huge eye opener for me. I'd never even heard of it, and here were huge patches of it all over the place! Here's another pic: 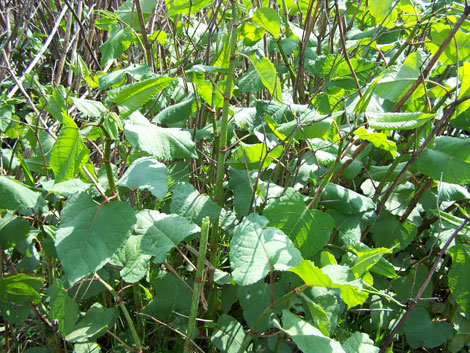 The stems/stalks of the knotweed kind of resemble bamboo, only smaller and greener. These are younger shoots. In time, they'll grow taller and the stalks will become too woody to eat. We pulled a few of them out to sample. The roots were small and red. With some experimentation, we found that the easiest way to eat this stuff was to peel back the harder outer skin: 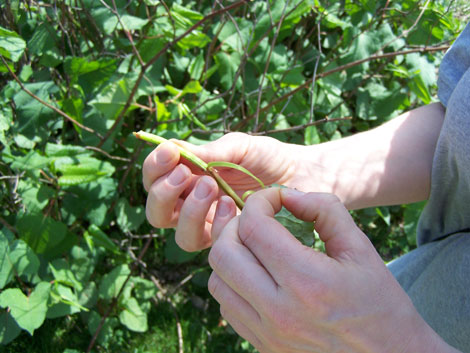 Then, you can just munch the insides for a tangy / lemony treat (likened to rhubarb).Wendi dug it: 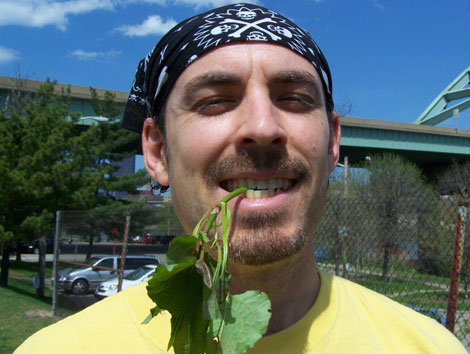 I sadly chuckled a bit to read on the Wikipedia page for Japanese knotweed that it's considered to be "one of the world's 100 worst invasive species." How backward is our society when we consider a FOOD to be an invasive species !? I tell you, I absolutely cringe every time I hear radio ads such as some recent ones in our parts touting new "advanced technology for ridding your lawn of those invasive dandelions."

One of the many insights that really wakes up in your head as you study wild edibles is the undeniable fact that nature is trying to communicate with us at all times. No matter how awfully we treat her, she's continually doing all she can to provide for us. People are hungry, yet there's food literally everywhere. People are sick, yet there are cures sprouting up on their front lawns. So, give FoodUnderFoot a visit, as this info is important and surprisingly tasty!

p.s. I wanted to add that Wendi's birthday was phenomenal this year. I shot some video that I'll try to post online soon. One is video of her talking about the gift she received, which included messages from many people who read this blog (though, she got a bit emotional and I'm not sure if she'll want me to post it), and another taken while we were out on her b-day spreading the word about reversing diabetes naturally through a raw foods diet.

Much love,
Melissa
(from www.FoodUnderFoot.com)

I have what looks to be this wonderful weed all over here in NY...I will definitely check to make sure that is what we have and ooo la la...snacktime! Thanks for the good info.

What a great post, Jim - such interesting comments and insights!

Awesome, Kandy! I'll ask Melissa, below, to recommend the best wild edibles field guide for you. You definitely *always* need to be sure before you eat anything wild. But, you're in for an interesting taste experience if it is this stuff. I could see it being decent in salads... maybe smoothies... maybe dehydrated ?? If you think of any interesting uses, let us know! -Jim

Thank YOU, Melissa (and Dave), for the informative "edible walk." For anyone interested here, what is your recommendation for the best field guide to wild edibles? I know you had a book with you, but can't recall the author names.

We use the book: Edible Wild Plants, A North American Field Guide, by Thomas Elias and Peter Dykeman.

Invasive species means it's threatening the biodiversity in its new habitat, since there are no good predators or competitors, like it evolved with. But if people knew we could eat it, maybe that wouldn't be the case anymore! Please put up more posts like this!

I have been researching Japanese Knotweed on the net for the last 3 weeks and it sounds like an amazing plant by all accounts. It has been growing in my Dad's garden for as long as I can remember around 30 years used to play with it as a child, had no idea it was edible. I am 90% sure it is knotweed, but am slightly unsure because the young shoots in my garden are very skinny and have found nothing so far that resembles the asparagus like young shoots that are mentioned in the recipes. But in every other way it looks the same heart shaped leaves, tall, rhubarb like stalks with the knots every so often, white flowers in August and dries out like bamboo in the Autumn. I read somewhere there are no poisonous look-a-likes? So I am guessing it must be. So can it only be eaten when young or can I make itadori tea with it in july and august? I

really interesting - many thanks :)

lovely to find likeminded people out there that are looking for food alternatives to supermarket rubbish.i will be on the look out for knotweed now to extend our diet. please keep it comming.
wicca hanna xx

If any plant species threatens native flora and/or fauna than it can likely be termed invasive regardless of it's edible or medicinal properties. Keep in mind that many of the native flora species may also be edible or medicinal and can easily be threatened by non-native invasive species. Its great that we have resources and opportunities to source food outside the plastic wrapper and I am certainly not dismissing the plethora of overlooked edibles/medicinals growing from our forests to our parking lots. However, when I've seen "invasive" plant species wipe out native understory, pull down mature trees, destroy insect/animal habitat, and threaten watersheds than yes I am able to recognize an extreme imbalance in plant populations. Thanks for your post and I look forward to learning more about wild edibles and medicinals.

I have tons of it you can all come and pick it, or eat it. I just really need to control it!