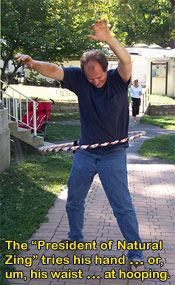 What fun it is to share a fun day with like-minded people at a special location, sharing good times, laughter, and delicious, nutritious raw food wonderment. Here are some pics from our outing -- hopefully the first of many such unique outings blending the Pittsburgh raw group with the D.C. one.

We hope this also provides some inspiration for other meetup groups to consider holding joint meetups in some geographically central location.

If you're new to raw foods, you're probably aware that eating this way isn't exactly mainstream. And, while we've talked here before about the importance of connecting with others for inspiration and support, it's true that a lot of that lends itself to participation in virtual worlds such as Twitter, Facebook, Give It to Me Raw, and other communities, blogs, and sites where raw foodies hang out.

We've said this before, but it's been a while:? Don't forget about Meetup.com! This site is unique because it can put you in touch with other raw foodies in the non-virtual realm. Now, what's that called again ?? ... oh yes, the "real world!" (It's easy to forget sometimes, isn't it !)? As special as it is to meet and hang out virtually with others who follow this lifestyle, there's no substitute for real-world interaction. That's why we get so hyped up here about things like the Raw Spirit Festival, to which we just devoted more than a week's worth of posts (see our posts from a few weeks back).

Meetup.com is a worldwide web site! So, no matter where you are on Earth (well, within practical limits), you should be able to find a raw foods meetup group to attend. And if one does not yet exist, you can create it right there, and then spread the word about it to build a membership.

We're fortunate in Pittsburgh to have a rather healthy meetup group and raw community.Not only do we enjoy good-sized crowds at potlucks (several of which Wendi and I have hosted), but word spreads about the size of your group over time and, in time, you'll begin to attract great speakers and presenters interested in talking with your group.

Over the past few years or so, Pittsburgh has attracted Rhio, the Gianni's, Tonya Zavasta, David Wolfe, Juliano, and a number of others you've probably heard of. (Wendi and I have been fairly active here as well, of course, hosting Q&A sessions, awareness days at grocery stores, retreats, and more.) Oh, and we just received word that Matt Monarch and Angela Stokes-Monarch will soon be visiting Pittsburgh, as well.

The key message here, though, is the meetups. Join one if you haven't already, and start hitting some potlucks. You'll have a great time, will meet and befriend like-minded people, will likely be exposed to recipes you'll fall in love with, and will get a heads-up when there are people coming into your hometown who make their living writing about, speaking about, and spreading the word about the amazing power of raw foods.

Again, here are some pics from our outing!

WOW.......what a marvelous time all of you had by the beautiful pictures that you posted! And what a fantastic idea in combining two area Raw Food Meetup Groups at one centrally located area! Love it!

And how true it is that no matter where one is one can find others of "like mind" in any city through Meetup.Com. I was fortunate to hook up with the Richmond Raw Food Community several years ago while there and meeting Matt Monarch and Laura Fox (who introduced me to a lovely man that is helping my brother with Healing Touch and Kangen Water in Richmond), Rob Murray and others. This past year I attended a raw food potluck in Richmond and met even more beautiful people.

I cannot say enough how loving it is to share with all of these people a lifestyle that I have chosen for myself.

Cheers to all in better health! Thanks for sharing your event here, Wendi and Jim. May there be more to come in the future. Tracey

Never read much about Kangen water. Interesting stuff! While at Berkeley Springs, btw, someone told us that the free spring water there is actually chlorinated! I was shocked, but the guy insisted that he asked and they told him this. He said it all goes into a holding tank somewhere, and then it's "gently chlorinated" and then delivered at the free "gentlemen's spring" spigot. I was pretty bummed out to hear this, of course. So, we filled our bottles straight from the ground (in a small pool where it emerges directly from underground -- definitely no chlorination there!). I still plan to call Berkeley Springs and confirm that for sure. One would think that fresh, pure spring water straight from the ground would actually be the best water on the planet.