Let's Look at the Benefits of Chlorophyll 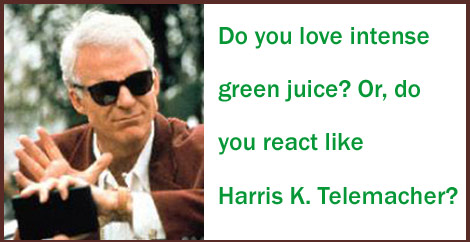 In the comedy film, L.A. Story, there's a scene in which weatherman Harris K. Telemacher (Steve Martin) visits a friend and is asked to taste a *very* green-looking juice. He does, and then proclaims it's "exactly like licking a shag carpet." ?Funny how some people adore intense greens while others experience the polar-opposite reaction. (There are numerous funny food- and health-related jokes in that movie, by the way!)

Yesterday, we discussed some unusual considerations with respect to greens, ultimately leading to a brief discussion of chlorophyll (the green pigment within almost all plants that plays a key role in photosynthesis). 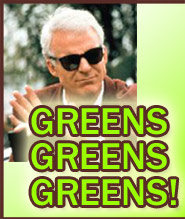 As anyone who has browsed supplement aisles in health food stores has probably noticed, chlorophyll has been isolated (just as most nutrients have by now) and made available as a supplement -- usually a liquid, although sometimes as a powder. So, quite a lot of people have come to seek out the benefits of this green friend.

For now, let's look at some natural, whole food sources of concentrated chlorophyll. As we discussed yesterday, this is actually fairly easy -- just go for the greenest of the greens! So, things like kale, spinach, and parsley are high on the list.

Another really significant source, according to a few web sites we read, is wheat grass juice. This article on NaturalNews.com, for example, states that wheat grass is 70% chlorophyll. It would be great if there were a chart somewhere stating each green and the percentage of chlorophyll it contains. But, we think everyone can agree that 70% is a significant number!

Given the long and widespread history that wheatgrass juicing has in the natural health and healing arena, we believe it's a recommendable idea to try it out for yourself from time to time, or even for a few weeks, and see if it makes any difference in how you feel. If there is a risk to this, we're not aware of it, as chlorophyll (at least in its natural state, derived by eating whole, raw foods) appears to be about as non-toxic of a substance as there is!

Several years back, we went through a fairly intense wheatgrass phase. We would source the whole wheat grains from our local co-op and, within a week or so, would produce large trays of the grass in our kitchen. Intuitively, there's something to this -- to how easily and readily it grows. It's as though nature *wants* us to have it.

In any case, from there, we would juice several handfuls per day, either adding it to our juices, or doing "shots." It was funny, really... Wheat grass juice is kind of divisive in terms of people's reaction -- much like, say, durian. In other words, some people love it; others can't abide it!

However, if wheat grass is 70% chlorophyll, then -- at least in my (Jim's) opinion -- I can tell you that chlorophyll indeed has a very "green" taste, although also somewhat sweet. Personally, I always loved it -- the whole ritual of growing it, harvesting it, juicing it with our hand-crank juicer, and then "doing the shot." As I recall, Wendi wasn't as fond of it; she had more of a "Harris K. Telemacher" reaction.

Whether it benefited us physically, I suppose I couldn't definitively say. I like to think that it did, though -- just based on all of the literature we'd read at the time, and all of the widespread claims of healing. Would I do it again? Definitely!

If you're on the fence about trying a wheat grass juice (or a chlorophyll supplement) regimen, you might want to know some of the specific conditions for which chlorophyll is reportedly beneficial. Those things include:

Regarding that last item... We know that this may be on the minds of many people in recent times, given the radiation concerns coming from the Japanese nuclear plants at the moment. So, we'll discuss take the conversation in that direction tomorrow.

I go through phases where I like wheatgrass and when I don't. I just hope I get enough green in me that it's ok to skip wheatgrass for awhile when I feel averse to it.

That's a good way of approaching it. LOL I used to detest the taste of it, but now I kind of like the sweetness. Maybe that means I *need* the nutrients it offers now, rather than the last time I tried it. :-)