Here at Pure Jeevan we are preparing for our cross country tour to educate others about raw foods. This means we are paring down on a lot of things, donating a lot, selling some things, and pretty much not buying anything unless it's absolutely necessary. That's what we've been doing for almost two years now (we're waiting for the house to sell). Recently, however, I decided it was time to spend a little bit of money even if it wasn't absolutely necessary. 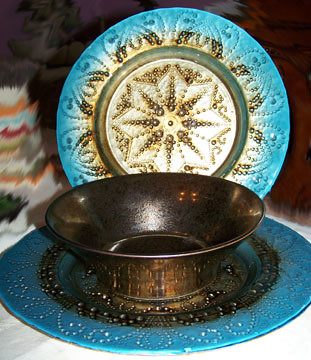 What did we buy? Dishes! Seems a bit strange to finally spend some money on something unnecessary and have it be dishes, right? Well, I had a few reasons for this purchase. The first is that when we are living in the RV, the space is going to be minimal. There won't be a lot of room for dishes, let alone much of anything else. Since there's not a lot of space to have dishes drying, we'll need to be washing, drying, and putting away immediately after use. That may not sound like a big deal, but when someone in the family decides to eat a few different things and leave the dirty dishes in the tiny RV sink, on the small counter, or somewhere else, it's going to really seem like a bigger mess than it is. So, to remedy this I thought it would be good for each of us to have our own dishes. That way we have a sense of responsibility for our own particular dishes--we know they are ours and we are responsible for taking care of them. 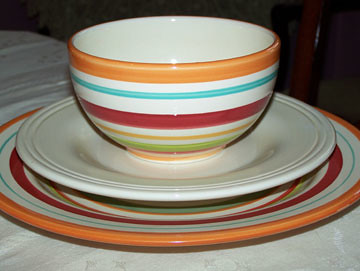 The second reason I decided to get the dishes is because here at the house someone (not saying names ;-) ) has been eating meals, snacking throughout the day, and using dishes up faster than I can keep up with them. So, we're beginning our RV routine right here, now, in our home. We eat on our special dishes, we wash them, and then put them away. This has already cut down on the amount of dishes so much that it's a joy to wash the few that are in the sink! 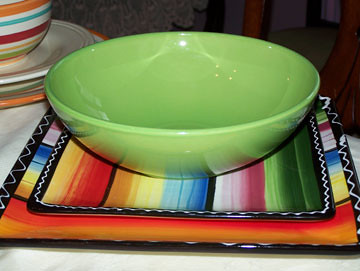 The final reason for the new dishes is because they are fun! It's fun to see the different colors, styles, and sizes. On top of that, simple meals served on colorful dishes makes the meal even more enjoyable. While we were shopping for the dishes, Jim had picked out a set that was very earthy looking. I liked it. When he saw the colors that KDcat had chosen, however, he said that it looked like she'd be having a party every time she ate and he wanted something more fun, too. So he found a set of dishes that seem to shout "party" every time he eats, now! 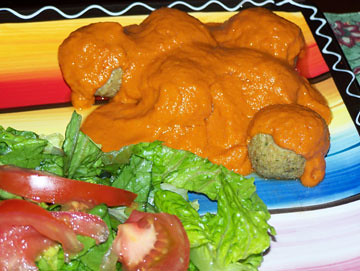 We don't have this problem, but if someone in your home (particularly children) aren't interested in eating healthy foods, maybe allowing them to select some fun dishes for themselves will make meal times more enjoyable? We went to a discount store and nothing we purchased cost over $3 each. If we didn't find anything there, we planned on checking out the second hand stores to put together our unique dish sets. This doesn't have to be an expensive purchase. We did it all for between $20-$30. 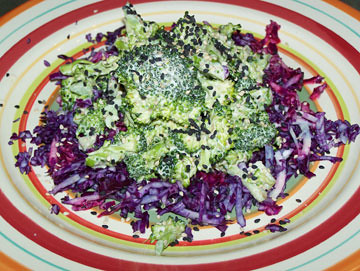 Just wanted to comment that the Spicy Broccoli recipe, pictured at the bottom, was awesome! (In case anyone here was wondering.)

I love this idea! How fun and cool! Ya'll are so adventurous!!! Keep it up and I'm so agreeing with you (energetically) for your house to sell and you to start rolling in your RV soon!!!

What a great idea! And everyone's dishes are so colorul and pretty.

I didn't realize you were going to hit the road in an RV. We've been RVing for years now and just love it. We have a 5th wheel.

I'll keep my eye on your schedule once you take to the road and see if you come nearby here in Washington State. *�*

How exciting! Let us know when you're in South Florida and you can stay with us, we even have an RV Hookup and plenty of space! We'd love to have you. And we'll make you and awesome meal! Check out our backyard jungle--http://www.slide.com/r/YMqK_J5slD-0dhXeDxY1RW-3BTt_rFUO previous_view=mscd_embedded_url&view=original

Great idea! It's funny because I have a cupboard full of mugs yet I use the same one for my lemon water every passing morning. Actually, I got it at the Fireborn Pottery studio on the South Side of Pittsburgh. The owners have mastered beautiful glazes. Anyway, both meals looked delicious. . .are the recipes in you the raw book you sent me?

I've been following you and had no idea about your RV dreams. We're waiting till my manbears dissability money to come in and will be buying an RV to follow the craft show circuit with my soap and body care products and raw food events. I'm so excited for you.

Hi Wendi, Jim and KDcat
Ihave been following your blogs etc for some weeks and just wanted to encourage you folks. You ooze enthusiasm, laughs, love and life! and even your dishes show that as well. I'd love for you to come visit me in Manchester England but I'm not entirely sure if you can get a 'chitty, chitty, bang, bang RV!' All the very Best