In all of our discussion of immune-building lately, we remembered today that we left out one enormously important item that should be present in anyone's "healing toolbox." That item is, of course, laughter. What better time than a "Fun-Filled Friday" to celebrate the healing power of humor! 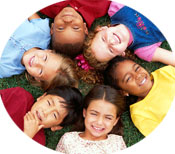 Years ago, we'd heard a remarkable story about a man who had cured himself of a terrible disease using laughter as his "medicine." According to the story we heard, the man checked himself into a hotel and just watched Marx Brothers comedies for hours on end, and was eventually cured.

In searching for that story, we came across a retelling of it in article on Natural News, by Citizen Journalist Cindie Leonard, on the healing powers of laughter. The man was Norman Cousins.

Here's a great quote from that Natural News piece on the healing power of laughter:

So, what are you waiting for ? Enjoy some laughter right now! We invite everyone to share a joke, a link to a funny YouTube clip, a link to a funny blog post, a suggestion for a funny movie -- anything! (Let's keep it reasonably clean, okay !)

Oh, and by the way, tomorrow is the birthday of Yogi Ramesh, popularly known as the Laughing Yogi. Happy Birthday Yogi Ramesh!!? This man has literally lifted the spirits of millions of people through his work at the Universal Temple of Yoga and Inner Peace. Wendi got to meet him in Sedona in 2008. As you can see in the picture below, they're both laughing!! 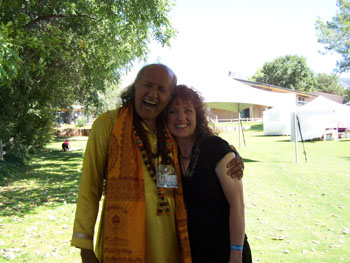 This is sooo cute!

This one is sooo hilarious! Excuse the content.. but it's bonafide adorable!

A Spanish Teacher was explaining to her class that in Spanish, unlike English, nouns are designated as either masculine or feminine. 'House' for instance, is feminine: 'la Casa.' 'Pencil,' however, is masculine: 'el lapiz.'

A student asked, 'What gender is computer '

Instead of giving the answer, the teacher split the class into two groups, male and female, and asked them to decide for themselves whether computer' should be a masculine or a feminine noun. Each group was asked to give four reasons for its recommendation.

The men's group decided that 'computer' should definitely be of the feminine gender, 'la computadora', because:

1. No one but their creator understands their internal logic;
2. The native language they use to communicate with other computers is incomprehensible to everyone else;
3. Even the smallest mistakes are stored in long term memory for possible later retrieval; and
4. As soon as you make a commitment to one, you find yourself spending half your paycheck on accessories for it.

The women's group, however, concluded that computers should be Masculine , el computador, because:

1. In order to do anything with them, you have to turn them on;
2. They have a lot of data but still can't think for themselves;
3. They are supposed to help you solve problems, but half the time they ARE the problem; and
4. As soon as you commit to one, you realize that if you had waited a little longer, you could have gotten a better model.