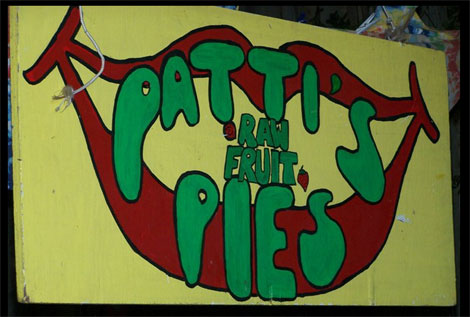 In either case, I can think of perhaps no greater form of self-expression and nonconformity than the creation of a raw fruit pie. Think of it not as a dessert, but as a symbol of your own limitless, blazing, dazzling, unique, fiery spirit. Here's what a slice of a Patti's Raw Fruit Pie looks like: 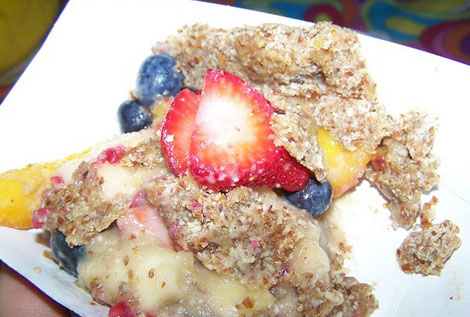 But, your raw fruit pie might well look and taste quite different. ?I thought I'd share today some elements of any raw fruit pie, just as we shared a more universal take on parfaits last week.

With a pie, you basically have only two requisite components: (1) a crust, and (2) a filling. I think, in order to classify something as a "pie," you'd need to at least include some semblance of those two things -- although "requiring" anything at all within an article themed upon nonconformity, I'll admit, is humorously ironic. ?Of course, pie is also quite often topped with something (usually ice cream), so we'll include "(3) a topping" as an optional, yet desirable, component.

To those unfamiliar with raw foods, seeing a raw pie is almost always exciting. I, too, remember the joy of learning that one could enjoy pie made of natural, and healthy raw ingredients rather than the Crisco-laden heart-clogging flakiness that we all love and hate simultaneously. Once we discovered this, we began doing things that would have been considered insane by conventional society -- things like having pie for dinner! So, let's get to it...

Part One: ?The Crust. Okay, so all pies need a crust. ?Since this is not meant as a specific pie recipe, I'm just going to list the things you'll want to play around with. ?First, you're almost always going to want to have access to a food processor. I'm sure you could somehow achieve a crust without one, but it's probably going to be significantly easier with one. So, into your food processor, toss:

Process your mixture adding in the sticky part slowly, until you've achieved something rather thick and, likely, very messy and sticky.

From there, you'll want to press this into your pie tin (or, really, any kind of dish). We've found that if you "pre-powder" your dish with a coating of something (we use powdered raw carob), the slices will be easier to dish out later. Also, you can pop these pie crusts into the freezer for later use, as the cold will help them set up more.

Also, as you can see in the above picture, the pie shown has some crust on top as well. This is optional, of course. And, remember, it can be more of the same crust you used on the bottom, or something entirely different. Furthermore, it could be something raw, or not. (See last Friday's post for a brief discussion of raw and not-so-raw options in the "crunchiness" department, as much of that applies here.)

Part Two: ?The Filling. Again, this is going to be really tough to mess up, as all fruit is naturally sweet and delicious. ?The goal here, in general (or, at least, what I like to do) is to come up with something that has a bit of a sauce and also a lot of whole pieces of fruit. So, I often like to make a base mixture of briefly blended fruits (e.g., using some bananas, strawberries, berries, etc.), and then stir this up with some chopped fruits. Again, there is no right or wrong way to make a filling. Use any fruits (or anything else) you like, either singly or in combination with other things.

Don't forget that you can spice the mixture up with any spices you like! For whatever kind of pie you're making, try using the same spices that you'd use for that pie's "cooked equivalent." Also, you may or may not want to sweeten the mix a bit with a sweetener of your choice. Personally, I find the fruit is usually sweet enough on its own. But, it's quite common for raw foodies to sweeten a pie filling a little bit.

Of course, once you get your filling made, simply pour it into your crust and you've got a raw pie! ?We generally like to refrigerate, or even freeze, ours prior to serving.

Part Three: The a la mode part. ?Again, you've got options here -- from (1) not using a topping, to (2) using a liquid cream-style topping (such as is traditional in parts of Europe), to (3) using an ice-cream topping (traditional in the U.S.). ?No worries... all are easily achievable with raw foods. In fact... this post is getting a little long-winded ... let's cover creams and raw ice cream tomorrow. :-)