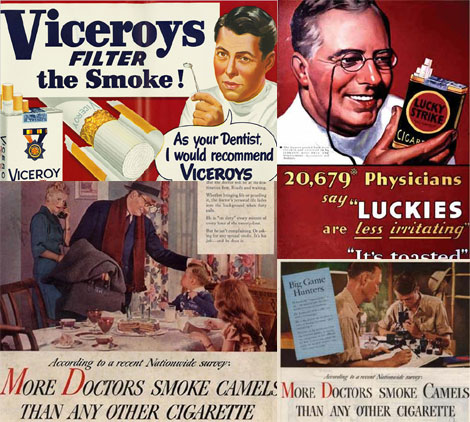 Jim here again... What do you think of that montage of vintage cigarette advertisements ! Knowing what we now know about cigarettes, it's tough to believe that such ads could have existed only 50 years ago, but the campaigns were real. Did doctors actually see no harm in cigarettes? Were there no pulmonary specialists back then who thought that habitually inhaling smoke might not be such a healthy idea Who knows... ?As I like to believe when it comes to doctors, even though they're quite oblivious to the harmful effects that chemicals have on our bodies, they do seem to mean well (in their own deluded ways). So, I don't hold it against them so much as I now hold it against individuals to think for themselves and challenge healthcare practitioners.

The world is far from ideal when it comes to consumer safety -- and especially with respect to non-food compounds that enter our bodies. This happens through eating or drinking such compounds directly (e.g., pesticides, chemical preservatives, and other artificial ingredients), through ingesting things that have leached into foods (e.g., BPA leeching into liquids from plastic bottles), through contamination (e.g., the seemingly omnipresent pharmaceuticals in our water supplies), and through inhaling fumes and particulate matter produced by industry. In an ideal world, we would always have a choice about what enters our bodies. This is one major reason, for example, to support labeling laws as they relate to things like GMO foods. (As for that issue, we here at Pure Jeevan would also support an outright ban on those abominations. But, that's another issue.) 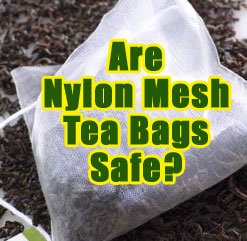 In any case, as I was saying yesterday, my goal (prior to hitting that interesting detour) was to stop at a coffee shop in hopes of procuring a nice cup of green tea. Lately, I've been occasionally enjoying the TAZO brand China Green Tips tea. "Cooked" or not, I really do like this tea. (And, for the record, I don't consider tea a "food," per se.) However, I do have one concern about this and other brands of tea these days.

A few weeks ago, we were en route back to Pittsburgh (from a wonderful raw food gathering in Berkeley Springs, WV) and I'd stopped at a Starbucks for a pick-me-up green tea. Wendi took one look at the tea bag and immediately said, "Is that plastic " Upon initial examination, neither of us could be sure what it was made from. It did seem awfully plastic-like, though. ?After discussing it for a while, we became concerned that allowing a piece of plastic to soak in scalding hot water for 5-10 minutes might cause some kind of undesirable (at least, to us) chemical reaction.

I did a little research to try to at least take one small step toward understanding (1) if there is any health risk and (2) if so, what that health risk entails. As it turns out, the tea bags at Starbucks (specifically, for the Tazo brand tea) are made of nylon. That's just about the only fact available at this point. While I found quite a bit of commentary both for and against its use (mostly written by tea enthusiasts), there just wasn't much scientific journalism devoted to this particular health issue (aside from a few editorials related to biodegradability). ?While I did find a few references to nylon's heat resistance, I maintain concerns over whether steeping in such scalding water for 5-10 minutes could release undesirable substances, even if in small amounts. If anyone out there comes across such a study, I'd be interested to see it.

From an environmental standpoint, it certainly seems less environmentally friendly than the use of traditional paper tea bags or (of course) loose tea. After all, nylon is a plastic, which is a highly polluting industry. (Although, admittedly, so is the manufacture of paper products, which are treated, bleached, etc.). ?In the end, we're all consumers, like it or not. However, it's my opinion that we should strive to use the Earth's resources in the most responsible and sustainable way possible. For tea, it seems to me that loose tea would be the most environmentally friendly manner in which to brew your beverage, followed by paper tea bags, followed by the seemingly more-questionable nylon. ?Does that mean I'm giving up an occasional China Green? ?In theory, I'd like to say yes, but I still do drink it from time to time. Not too often, though.

It may be hyperbole to compare tea bags to cigarettes. But, you just never know what the next health debacle might be. Will it be, once and for all, GMO foods? Will it be cell phones? Will it be some common personal care product or ingredient? Will it be nylon tea bags?

Thank you ... I have been looking for this for a while.

I recently ordered TAZO tea bags online and when they came in, I noticed that:

1) the bags were nylon

I am not sure if this is good for the body...

I went to put the Tazo tea bag that my partner brought hom from Tim Horton's in my compost and wondered - wow that is not biodegradable, and then I wondered as well if that is healthy to have steeped in hot water with my tea. Any body know?