To start, here's a quote from author and Jungian psychologist Marion Woodman, from her book, "The Pregnant Virgin: Psychological Transformation" (p. 56):

"Obesity is a manifestation of a soul that has more energy than the body can deal with. ... [A]lways, people whose psychic energy has had to carve out other channels of expression because their bodies were blocked, are haunted by their refusal, conscious or unconscious, to permit their souls to take up residence in their bodies. The result is that, without quite understanding what they are feeling or why they are feeling it, they are possessed by homeless souls who wander like ghosts in a bleak twilight zone where they cannot find shelter or rest."

Heavy stuff, eh? ?This is a complex notion, not to mention it being a rather tough chunk of grammar to parse in one reading. In Woodman's view, the body is a mirror of the soul and health challenges such as obesity might be explained by at least the following two factors: (1) a person's soul could be extraordinarily expansive, and/or (2) for various interesting reasons, the subject's body is "rejecting" or "blocking" the soul's fully anchoring within the body. 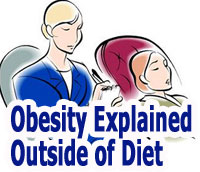 Now, that all may sound a bit "out there," but there are scientific psychological analogues to help explain a lot of this (at least, within the Jungian tradition), one of which I'll share momentarily. But, sticking for now with the rationale put forth in the quote, it's actually (to me) quite interesting in that it's almost an unexpected laurel under this scenario to have a weight problem. In one sense, it's like saying, "Your soul is so unusually powerful that your body is struggling to contain it." Often, says Woodman, such a soul (unable to fully seat into a physical body) may manifest quite successfully into the larger "body of the imagination, a body that includes the entire visionary world of the arts."

However, she does identify this as a problem rather than solely an accomplishment, and offers some interesting theories on why it happens (such as various emotional traumas, for example). ?In any case, ten pages later she offers a more concrete example of the problem (specific to obesity) and one suggested treatment via what's known as body work:

"If ... she images her big body as a defense against the world, she may also realize that she imagines her defensive wall in a circumference two feet around herself. Her physical body then holds enough weight to fill that space. If she transforms her defensive attitude to one of inner strength, then she can concentrate on a shaft of inner light within her body that cannot be invaded.... Once she has achieved this, her posture noticeably changes and gradually her body takes a more definitive shape and substance."

Please note: This book isn't about physical health or diet at all. It's simply something that we happened to check out from the library and noticed that it offered an interesting take on the matter. But, regardless of the book's overall subject, I suspect there's something to it all. (I'm just not sure *what*, exactly, or to what degree I personally believe this nails the problem and solution down! But, it's at a minimum certainly material that merits personal reflection.)

Weight is always a touchy subject and, in many surprising ways, I'm actually thankful to have struggled with it for most of my life. I feel that, since Wendi and I have "been there," we're able to discuss it absolutely frankly, in a first-hand way, and without passing judgment. Oddly, I'm drawn to the idea of a soul so creative that it was tough for my body to learn to contain -- a bit of an ego-booster, eh? ?And, I'm likewise drawn to the notion of a shaft of inner light, always brightening and functioning to lessen that remaining defensive wall I still have up.

In so many ways, we've written on these topics before. I knew that Wendi surely must have, in particular -- and, of course, one quick blog search pointed to a piece of her's from a Mayday in 2008 entitled, "Thankful Thursday: Creativity." I'd invite you to read that post as well today! (BTW, you may have noticed that we've begun numbering our posts lately. We wanted to underscore, in some small way, the vast amount of raw food diet information we have available here -- and we also now include a search box on the margin of every page of our site to help people locate the information we've written about!)

Finally, I'm exercising a bit of restraint this week in not covering these particular topics as in-depth as I could. I feel it's more important to simply put these things out there for others to personally mull -- and, if you're moved to share an opinion in the comments, we're genuinely interested in reading it!

Marion Woodman is brilliant. She understands the link between all that makes us who we are (body, mind, spirit, emotions). I like this blog post and look forward to reading what you share for the rest of the week, Jim!

Love, Love, Love this blog. You have tickled my fancy just enough to caused me to search for the author find the book at my local library. Will add it to my summer reading list. I am intrigued by the notion. Whats more as I am still in the journey of obesity is it refreshing to witness the transformed lives of two people who have also taken that journey and lived to tell about it. Hugs to both of you. Keep writing, I'll keep reading.

Warmest Regards to you both.

Melanie! Thanks so much for your comment and I'm so happy you found us as you are on your own transformational journey!! Please be sure to keep commenting and we'll be better at responding in a more timely manner. It's great to meet you and have you as part of the Pure Jeevan family!