Delicious Idea for Produce... Putting the Economics of Raw Foods to Work For You! 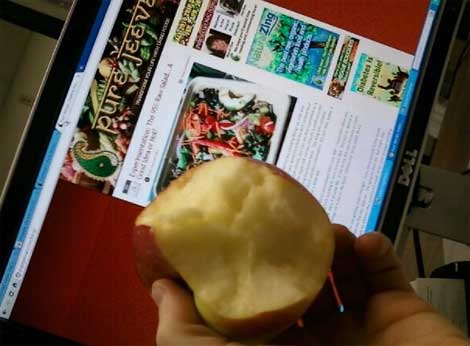 Looks dee-lish, right? ?(Okay, so maybe it's not the most appetizing pic in the world...) ?Anyway, one interesting thing about this apple is that I bought it (a whole big bag of them, actually) because it was so cheap. (I'm on a relatively tight budget these days.) ?But, if it was so cheap, how could it be so tasty? ?(And organic, too!) Well, that's where the basic law of supply and demand come in. Whenever a crop is at the peak of its season, the supply rises considerably. Instead of the store receiving X number of bushels of apples, they receive 5X or more. So, they slash prices to move that kind of volume.

The amazing thing, though, is that the influx of certain types of produce probably means that you're getting the items at their peak. So, when it's at its best, it's also at its cheapest! It's a simple point, really, but one that I tend to forget quite a lot. I'm going to make an effort now, though, to always buy a bag of the cheapest apples each week. I'll let you know in a month or so whether these apples seem to be better than normal. I like the theory here, although I'll admit it's just something to test out.

Fall is always a natural time to go apple-crazy, though. I eat them all year round, but I particularly crave them in the autumn. We had a little bonfire here in our backyard last weekend -- a little "raw dessert" kind of get-together. For my contribution, I simply cut up about 10 (cored) apples, poured some fresh-squeezed orange juice on top (to help keep them from turning brown), added a few cups of chopped walnuts, added some apple pie spices (clove powder, nutmeg, cardamom, cinnamon), drizzled some agave nectar on top (yes, we still consume agave nectar here), and tossed in a pinch of salt. Then I stirred it all up and served it. (Wendi makes this, or something similar, quite a lot for breakfast. Let me tell you, it's so good, you can eat it as a meal!)

So, go apple crazy!! And, let me know if my theory holds true in your area, too!