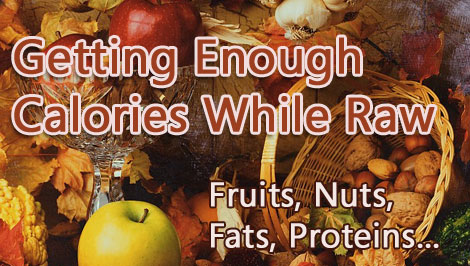 The short answer, for me, was fruit, fruit, fruit! ?But, let me offer a fuller and more general answer for everyone. I think there are a few ways to interpret everything, but the main message I'm receiving is an underlying concern about getting enough calories. I agree that produce is packed with water but, from there, my answer can go a few different ways (or may touch on all of these): 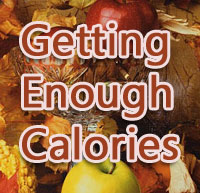 1. Are you concerned about calories I share your concern here, especially as you've singled out produce as your primary source of calories (omitting mentions of fats / proteins). I'm sure you directed your question to me because I tend to talk about my own ambitions with respect to low fat raw veganism. I'll tell you this: ?I adore the taste of nuts and other raw fats. But, personally, they just weigh me down and I usually feel less than peak when I over-indulge in them (and, that usually reflects just a small amount of nuts). So, there are often long stretches in which I avoid them and, during those times, I sometimes wonder whether I'm getting enough calories. But, I've been experimenting for years with various combinations of foods that do make me feel as though I'm operating closer to that peak level. For me, it involves a lot of fruit and a lot of greens. And, the more you look into the caloric content of fruit, the less you may worry about caloric needs. (I had one smoothie recipe I used to make a lot that clocked in at around 1,000 calories!) But, this is also a complex issue because caloric and nutritional needs/goals differ greatly from person to person.

2. Are you feeling unsatisfied by the raw foods If this is the case, it could be for a variety of reasons, both physical and emotional. On the physical side, one suggestion would be to try some richer raw foods -- things like nuts, seeds, oils, and protein powders (or, if you're not going for 100% raw, then try some beans, perhaps) . But, if the nuts and seeds don't appeal to you (and, I'm not recommending that you over-do it on these things), don't overlook the fruit fats like avocados and Thai coconuts (young coconuts). Still, this issue could be complicated by individual physical reactions to raw foods. For example, Wendi has had a tough time with some raw foods because of her Lyme disease. Or, there's a possibility that your body is not in the proper state of balance to benefit from the type of diet that you may want to exist under. (That, alone, can be a difficult thing to determine and/or to reconcile.) Another possibility could be the interaction of the particular raw and cooked vegan foods you're eating. For example, white sugar and flour are both vegan but are both quite capable of making a person feel awful and, in turn, unable to follow a more healthy diet the rest of the time. And then there are emotional aspects of all this, such as...

3. Are you still craving bread and potatoes Here's the long answer, via a tangential story: ?You know, vegans often cite the opiates in dairy, but I personally kicked that craving ages ago. For me, I always feared dairy, to be truthful. I was always overweight and thought that eating too much cheese might give me a heart attack. So, that particular opiate never affected me much. But, when it came to wheat and breads... To be honest, I still want them. I look at a bagel and, to this day, think: Man, I bet that would taste amazing. But, I haven't had any bread since probably sometime in 2007, as I came to understand it as unhealthy for me. A few times, I came pretty close to trying it again, but I just feel that, for me, it would be too slippery of a slope. (So, no bread! I don't want to weigh almost 240 pounds again!) But, as for potatoes... Those are actually one thing that I've returned to in a limited way. ?I went without them, of course, during my two full years as a 100% raw vegan, and largely without them before and since. But, when I backed my "rawness" down to 80% or so, I came to view potatoes as not so awful for me -- and that's even in light of things I've read in great books like Rainbow Green Live Cuisine (citing studies that indicate an elevated glycemic load for cooked potatoes). But, I've been very conscious about moderating this sort of thing -- and report no ill effects to date as a result.

So, as you can see, even though my personal answer was "fruit, fruit, fruit, " the general answer to this question is almost too complicated to fully address here on the blog. But, yes, you could try upping your fruit intake, including some fats and proteins, and maybe even some healthier cooked foods (e.g., some beans or grains) for part of your diet to help address feelings of hunger. Another ally in the raw food world, especially useful during transitioning, are the packaged raw snacks that are increasingly available (such as those at, you guessed it, http://tinyurl.com/NaturalZing)! While transitioning to raw, I regularly enjoyed things like Gopal's Power Wraps and various raw bars.