In this special five-part series, Joanna Steven uncovers where some top vegetarian athletes get their protein. Here's part five, focusing on Tonya Kay's take on this issue.

Professional dance is of most challenging sports requiring athletes to perform at expert levels of flexibility, strength, coordination and emotional fitness in order to entertain their audiences. Having been vegetarian since age 7, Tonya Kay has built her glorious professional dance career entirely on a vegetarian diet.

A vegan since age 17, Tonya Kay has pushed her physical body to the limits on tour in STOMP for 3 years and has broken bones performing aerial work with Off-Broadway's aerial stunt show De La Guarda. She has performed in concert dance companies in NYC and Los Angeles, and recently played two sold out shows at Madison Square Garden as part of Panic At the Disco's rock-n-roll tour. 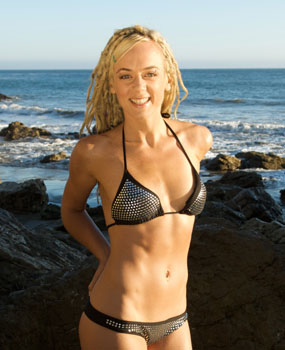 Active in the environmental and health communities when not on stage, Tonya Kay recently published the first ever conclusive Raw Nutritional Analysis, wherein her diet is analyzed for one month to reveal exactly "Where do raw vegan athletes get their protein from "? And their calcium .... And iron ... And ...

"I've heard it all from athletes regarding the cruelty-free diet - "But I need protein," "I won't have enough energy," "I tried that but I felt weak." Those excuses are just that; excuses. Excuses are self-imposed limits preventing you from taking a risk, trying something new, and potentially being your greatest yet.

If you are someone with excuses, forgive yourself. Most of these excuses are subconscious and filled with well-intent. Seriously ... if you actually thought you were depriving yourself of "nature's building blocks", for goodness sake, it would be irresponsible of you to eat that "deficient" diet. Unfortunately, our well-intent is misguided by heavy marketing. Corporately-pushed consumerism compels our purchase with a mere High Protein label or fancy Low Carb wrapper - forget that most consumers don't know what the word carb is short for, let alone even know what one does in the body!

As a professional dancer training 10-25 hours/week, the foods I find most beneficial to my performance are the water-rich, and amino acid-rich fruits.? My body builds muscle amazingly quickly as a raw vegan athlete, based on activity and a clean diet, which is why I eat more ripe avocados than any other food under the Southern California sun! ? Comprised of 74% water by weight, the avocado digests like a fruit, rather than a fat, keeping me sweating clean all day. And with it's full spectrum of all 18 amino acids including those elusive essential amino acids, I know that the delight I receive from eating one is not intellectual, but instinctual - is there any doubt humans were born to eat this food - and a lot of it!"

Avocados may just be the perfect food. Providing all of the 18 amino acids, avocados are bursting with nutrients, including vitamins A, C, E, H and B complex. Avocados are exceptional sources of vitamin K, potassium and essential fatty acids and users report softer skin, lustrous hair and hormonal balance.

Athletes who experiment with plant-based protein, consistently report a substantial increase in energy and a dramatic decrease in recovery time. This fact might surprise some skeptics, however its scientific basis is completely supported. Plant-based proteins are easily absorbed by the body, and when eaten raw, they maintain all their original living enzymes and nutritional value. They are rich in disease fighting fiber, minerals, vitamins, chlorophyll, and healthy fats and their production has astounding positive environmental impacts.?

Plant-based proteins are the healthiest naturally available sources of fuel for the human body. And the world's top vegan athletes agree. To quote Tonya Kay, "If you want average results, do what average people do. But if you want extraordinary results..."

[Note from Pure Jeevan: Even though all of the sources of protein highlighted in this series are not raw, we feel it's important for people to realize that meat isn't the only protein source available for athletes, who tend to desire more protein than the average person.]

Thanks for shouting out the positive encouragement for raw vegan athletes. If anyone is interested in the first and ONLY complete nutritional analysis of one month on my raw vegan athlete's diet, come visit http://kayosmarket.com. Most importantly, you can do it - stay raw and thrive raw!

We'll be watching for ya Tonya! Thank you sooo much for an entertaining, yet informative post - we did not know all this about avocados! Yeah! I love them but didn't eat so many because I am trying to lose fat and thought they were fattening. Silly me!!!

Oh my - sorry, I just read Tonya's post above with the link. to the information - thank you!

Yes, Tonya has a lot of informative information available on her site. I
hope you'll check it out, Debbie. Tonya is a lovely, inspirational
individual.

Thank you Wendi for posting the article! I hope everyone found it useful :)

You are very welcome, Joanna. Thanks for approaching me to share it with
our readers. It was a wonderful article. :-)

May I have the permission to translate the "Vegetarian Athletes Share: Top 5 Sources for Animal-free Protein" into Chinese and post in my website, VegTomato, http://www.vegtomato.org/ ? I wil link back and cred it to here.

Wow she is so sexy, well eating healthy is really appropriate to have and maintain a healthy lifestyle.