More of what we've been eating

Thanks to everyone who has offered, so far, to help us out with our project (mentioned in yesterday's post). If anyone else thinks they'd like to help, we're looking for as many people as possible! We'll fill you in soon, just be sure to send us your email addresses if you haven't already done so. Thanks!

Here are more pictures of some of the foods we've been eating. Over the past year, we've pretty much been eating simple foods (except for the time I was preparing meals for the Raw Food Retreat). However, recently KDcat has been doing some extreme yo-yo eating between raw foods and packaged/unhealthy cooked foods. The back and forth has been causing her to experience a bit of a tummy upset. So, I've decided to make our meals a bit more exciting for her---so she'll possibly not feel so tempted by all of the colors and artificial flavors of the packaged "foods" she's been eating.

Talk about color...check out this salad I made earlier today: 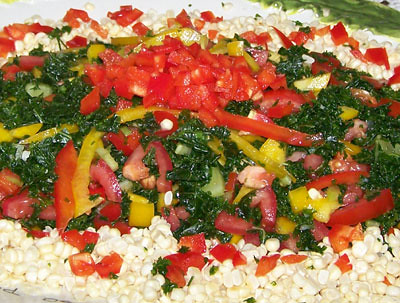 It's a kale salad mixed with chopped and sliced sweet peppers, tomatoes, lemon, salt, and a tiny drizzle of olive oil. I also added some fresh corn and a bit of chopped chives. It wasn't only vibrant, it was very tasty. 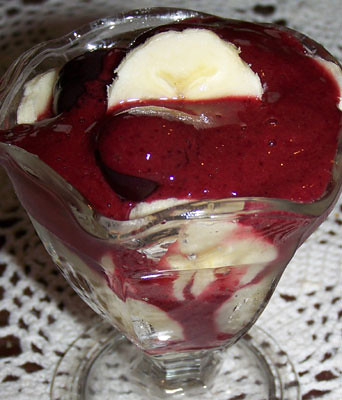 This cherry banana dessert was a huge hit. I lined the glass container with fresh slices of banana, filled the center with fresh cherries, and then poured a mixture of frozen cherries, bananas, an orange, and agave over all of it. 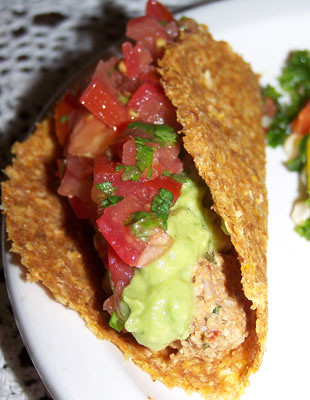 For our dinners, I've been serving the heavier meals (nuts and seeds).I was able to snap a picture of this corn tortilla filled with "refried beans", salsa, and guacamole before it was eaten. This meal was very much loved by everyone. The corn tortilla recipe comes from Raw Food Real World. I can't remember if I altered it, or not.

Don't forget to let me know if you're interested in possibly helping out a bit with a project we've been working on. If you think you might have a few spare minutes here and there, we'd appreciate the help. Just send (to WendiDee? @? PureJeevan.com) us a note saying you'd like to help and we'll fill you in on the details very soon!?

I wish you both lived closer, so you could stop by for some raw meals every once in a while. Maybe you could bring some of your home-grown veggies with you, too! :-P

I love you both!

wow, Wendi! Looks yummy! I have so much to learn in preparing meals that family members will like!

yummmmmmmmm..........those pics remind me of the wonderfulness from the Raw Retreat!

I have made the "refried beans" I still think they remind me more of taco meat! LOL At any rate, I wrapped mine up in some collards and even had a die hard SAD friend trying it, without me saying a word! :-)

Cherry-banana - what an amazing combo!!! :-) Thank you for sharing some yummy food pics! I've never liked kale but I think I could try that salad, it looks so good.

Joanna, I started with desserts. Once they were hooked on raw desserts, I then branched out with other raw dishes. ;-)

Faye, I think it's funny that they taste like taco meat to you. The texture is so much like refried beans when I make them. How cool that your friend ate them!

Sarah, did I just read that right? You think you could try the kale salad ! O.O I dare you...no, DOUBLE DARE YOU to make a kale salad and try it! :-P