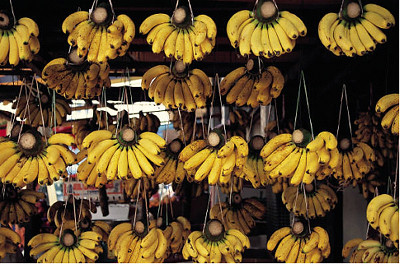 The whole digestion thing is pretty amazing. My digestion has always been poor and slow. Food used to sit in my stomach for so long that I'd get headaches that felt like they were from lack of nutrition (now I realize they probably were). But, I couldn't eat again, since my stomach hadn't processed the food. Even though my digestion is so much better now, it's still not perfect----which is why my iron is still not at a healthy level. Some people don't produce enough stomach acid, according to the holistic doctor I see, and that causes certain things like iron to not become properly absorbed, even if you are eating a balanced diet. I know that the longer I eat raw foods, the healthier I'll get and my body will be able to absorb iron and work efficiently.

While I was there piling the bananas into our cart, my friend said, "Let's see what's in *your* cart!" I giggled to myself, since I had just written about looking into others' carts just a day ago.So, this time someone was checking out MY cart! She seemed to approve of the variety. At the checkout, the person bagging said it was such a pretty assortment of foods and a fun one to pack. He, too, asked about the bananas. He also asked if we had a restaurant. "No" Do we organize a food-buying club? "No, we just eat a lot of fresh fruits and veggies." ;-)? I don't think it's always necessary to state that we eat only raw foods. Sometimes just seeing what we eat and noticing our health and energy might motivate others to do the same, without having to understand there's such a thing as a raw food diet.

I wish I saw you there yesterday...I would have loved to take a peek into your cart! If you think of it next time...bring a camera and take a picture to post!

We had some delicious veggie juice from some of our coop produce this morning: kale, cuke, carrot, apple. Ella LOVED it and couldn't get enough--which surprised me because it was such a dark color!