Should You Juice the *Whole* Apple, Seeds and All? 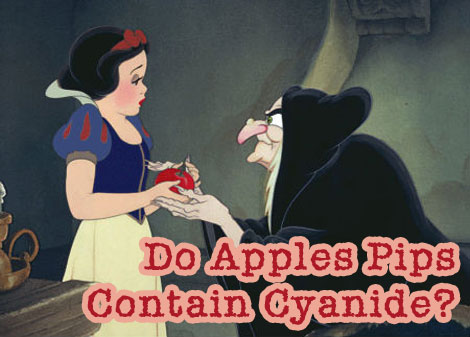 Jim here... A few months ago, I was in our local food co-op's juice bar. I'd ordered an apple juice and had cringed when I saw the barista chop up four Granny Smiths and nonchalantly toss the whole lot, seeds and all, into the juicer. That juice was for someone else. So, when my order came up, I politely requested that he cut the seeds out -- a request he reluctantly granted, although not without showing considerable annoyance. My thinking was: Hey, those seeds contain cyanide! Why would I want to consume that, even in small amounts 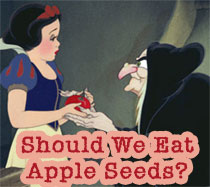 But then... Have you ever known anyone who died from eating apple seeds? ?I know I haven't. Also, after mentioning this to a few people I know, I found that a number of them regularly ingest apple seeds. And, well, they're still living. So, is there any truth to the rumors? And, should we be concerned at all about this?

In a word: Yes! ?Apple seeds definitely contain amygdalin, which in turn contains the much dreaded cyanide. Quite honestly, I do not know what the lethal dose is. But I do know that I don't intend to find out, nor do I personally intend to even flirt with any potential health issue if I do not have to. According to many sources, the cyanide lurks inside the pips (seeds). Much of the time, animals eating the seeds manage to swallow them whole -- and then the seeds pass through the animal's digestive system intact, thus retaining the amygdalin. Of course, the web site Snopes notes that:

Luckily for those fond of their Granny Smiths, the body can detoxify cyanide in small doses, and the number of apple seeds it takes to pack a lethal punch is therefore huge ? even the most dedicated of apple eaters is extremely unlikely to ingest enough pips to cause any harm.

So, either way (seeds passing through you intact or chewed), you probably don't have much to worry about. ?I suppose it's a matter of personal preference, in the end. My own personal recommendation would be this: If you're eating an apple or two, it's probably never going to hurt you to ingest the pips, if that strikes your fancy. However, if you're going to juice massive quantities of apples (with pips), or ingest apple juice daily (again, with the pips having been broken down by a juicer), my personal belief is that you may in fact be exposing yourself to somewhat elevated levels of amygdalin -- something that, given the choice, you might just as well decline.

After all, it may well be natural for animals to eat a few tasty apples, even as a whole meal. But, is it natural to drink 10 of them at once, as can easily happen when you juice Personally, I'll pass on that scenario, if only as a purely precautionary measure. What's your take on this?

my take? I eat the seeds. why? When i eat an apple i eat the whole thing-i'm usually someplace where it's not convenient to throw an apple core out, so, i eat it all and am left with just a tiny stem to toss.

Thanks for this Jim,
I have never really thought about I just push the whole apple in.
I know you should not give your dog the apple core and seeds due to the arsenic in them.
I am doing the green smoothie challenge at the moment with my fresh orange juice, spinach and bananas.

What if people have been told a great big lie all this time that the pips are poisonous while they actually contain a very important vit B17 that has cancer prevension properties? Go do some research or google this...A World Without Cancer (HQ) - The Story of Vitamin B17 - G. Edward Griffin

Such terrible assumptions are made when only a partial truth is examined. Apple seeds contain Amygdalin which does break down into Hydrogen Cyanide in digestion. Apparently that's all some people need to know to make it unsafe! This is not pure Cyanide, this molecular compound HCN is rendered completely neutral to the human body when it enters a normal cell, the enzyme rhodanese using sulfate converts the cyanide in the compound into cyanate which coincidentally is completely harmless. However we can even go further than that, cancer cells do not contain rhodanese, instead it uses beta-glucosidase which instead releases the cyanide (and the benzaldlhide in apple seeds)which in turns destroys the cancer cells! So by making a decision based on a partial truth thinking that it might hurt you, your actually missing out on a powerful anti-cancer agent! Of course this is not patent-able, so pharma's will hide this truth with tooth and nail. Don't listen to hearsay, actually research things....this can be found on the same snopes article that was so poorly referenced, as well as about a million other cancer remedy and health food references. Just google "benefits of apple seeds" rather than "poisonous apple seed"...lol.

don't be lazy ,get the poison seeds out,just because it does not kill you instantly does not mean it won't damage your liver or something in the future like cause cancer or something.remember your body is important to you.or think of it this way a lot of people smoke cigarette's and they don't die instantly but in reality they are slowly killing you.

Wow i had no idea at all that apple seeds contain cyanide. Is this how they make the poison then using apple seeds or is there something else which is easier to create it?