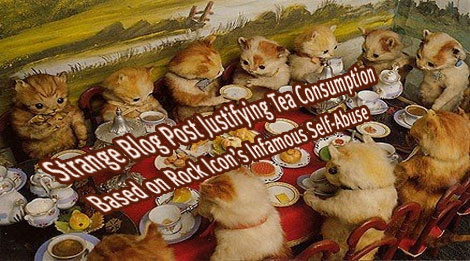 By the way, it's heartening to see recycling efforts growing on a national scale these days. Our new hometown of Portland seems to apply such practices considerably more seriously than our former hometown -- yet another an affirming fact for us. Portland has a great mindset about this in general. (Perhaps tomorrow we''ll feature another story along the same general theme of making the most of the resources we have -- this time related to local fruit trees in Portland.)

In any case, aside from the environmental pleasantries of reusing bottles, it's even more exciting to be able to brew whatever you want (caffeine-loaded or caffeine-free), and to wind up with your beverage of choice for next to nothing! In my book, this is a real win-win scenario! There's something very right-feeling about it all. As "consumers," we're always going to be using the planet's precious resources. But, I like the idea of working to reduce our impact and minimize our waste of resources. Why should I pay for a pre-made bottle of tea to be shipped across the country to me when I already have the bottle, the water, and the energy here locally? All that needs to be shipped to me is the tea, which is very light and requires little packaging.

ps Who has tea suggestions for me I really like: ?Black teas, spiced herbal teas, and kava (although I've yet to try a high quality kava blend -- still searching for that).

Have you ever tried Rooibos ? It's an herbal tea from south Africa ! wonderful ~ Hibiscus flowers are also great in tea !

I go away and you start eating cooked rice and beans, consuming caffeine drinks, talking about Keith Richards and the use of drugs, and post all kinds of cat/kitten pics on the blog ! LOL

So happy you are re-using the glass bottles and brewing healthier tea for yourself. I found an organic Lavender/Tulsi blend herbal tea that I've been loving here in Portland.

Anyway, just wanted to say it looks like you've gotten a little wild since I've been away. ;-)

I love and miss you!

p.s. For all of our Pure Jeevan family members, I think it might be important to know that neither Jim or I use drugs or alcohol and we don't advocate others using them, either. ;-)

The most shocking aspect of it all is the cat pictures, right?

Yes! ... but it's been so long, I've forgotten what it tastes like. Perhaps I'll toss a little Rooibos into my next batch. Thanks!! :-)

Jim....if you find your tea gets a little cloudy after a day or two, it's because you let it cool slowly rather than shocking it cold with ice. Brew it strong with a little less water, then pour it ALL over lots of ice, quickly. It'll last uncloudy and fresh for days.

Thanks! I haven't had any problems with cloudiness so far, but will remember this handy tip!

I'm a big fan of pu-erh tea - worth trying if you haven't yet. Cool blog - just found it!