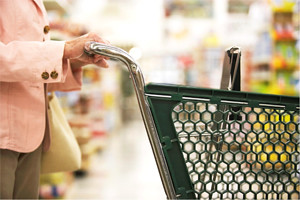 I was grocery shopping in Giant Eagle with a friend the other day; I was just there to keep her company. When we left the Nature's Basket area (where they sell organics and more natural items), I felt a strange feeling. I hadn't realized it, but over the past two years I stopped shopping in the other areas of the store! I told her that by the time we hit the packaged shelves of the Nature's Basket area, I'd already be done shopping and my cart would be filled. We had a good giggle and went on shopping.

Anyway, that has since brought my attention to the shopping carts of those around me. We do about 5% of our shopping in Giant Eagle (last minute things that we've run out of, that don't merit a trip to our Food Co Op), so lately I've found myself in Giant Eagle looking into the carts of those around me. I'm not judging anyone, I'm just curious. On average, just about everyone has a small bunch of bananas in their cart. There are the occasional carts with something like a cantaloupe, a bag of apples, and once I saw a single tomato and a bag of lettuce. The rest of the carts have been filled with packaged foods. There is next to no living food in the carts.

The observations caused me to ponder what my own shopping cart was like before going raw. What did I purchase that was living? We ate lettuce, but not every day like we now do. I rarely ate fruit, because I was always afraid it would make me heavier (if you are reading this and you think the same way, send me a note and we can talk about what I've learned). I always purchased onions and garlic (to fry), and broccoli. My tomatoes came in the form of a paste (organic and in a glass jar), since that was cheaper and seemed like a better deal than the fresh organic tomatoes. I'd sometimes buy sweet peppers (mostly unripe green ones, to fry). Other than the occasional salad, however, I can't think of anything I routinely ate that was living. All of the veggies I purchased were heated in one way or another before they touched my mouth. I do feel like I was doing something good, at least, to have purchased fresh veggies in the first place.

But, we weren't fresh food saints, that's for sure. The rest of our cart was loaded up with bags of frozen sprouted grain bread, packaged hummus, boxes of organic crackers, cans of beans (because most of the time I didn't want to spend the extra time pressure cooking the dried beans, even though I knew the plastic lining in the cans was very bad for my body), packages of tofu, basmati rice, baked organic chips for Jim, jars of organic salsa, jars of the best organic peanut butter we could find, pure fruit jelly, frozen organic bean and rice burritos, glass bottles of organic juice, bags of frozen organic veggies, and some fruit tapes or soy ice cream for KDcat. That was health food to us, and probably seems like health food to most people who have never learned about raw foods. When I think back on what we used to eat, it's no wonder I felt dead inside. I was eating nothing living except for the occasional salad. 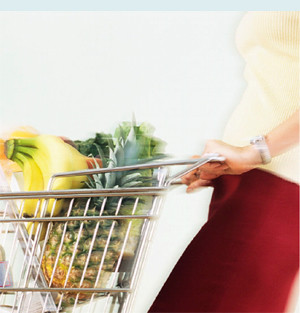 When we shop these days, we get some pretty strange looks and occasional questions or comments. People always question what big dish you are creating when you buy large quantities of certain items (like bananas). Two times someone joked that our cart was already overflowing and we were only in the first aisle, still. It's true--our cart is overflowing by the end of the first aisle. Then we zip through the rest of the store to pick up a few packaged things that one day we probably will do without (like agave syrup, raw carob powder, olive oil). Our monthly expense on organic produce is hundreds of dollars more than our monthly home mortgage payment, but to us the health benefits and the increased vitality and joy for life is worth the expense.

Put a little thought into the items you are putting into your cart the next time you shop, or look around at the items going into other carts. And, remember this: Life can only come from life; nothing dead can ever bring life. Eating living foods really does give you new life, from the inside out. Give it a try if you haven't already started incorporating more living foods into your diet, and let us know how you feel!

p.s. I know earlier today I said I was doing nothing this entire weekend, and really that's the plan, but sometimes it's hard to do nothing! ;-)