The Gift of Honesty: The "Crazy" Life of Raw Foodists

Brutal Honesty. 100% Transparency. Unedited Feedback. Absolute Truth. ... How often are we treated to these things by those we know? How likely are we do conduct ourselves with these ideals in mind?

If you could know what others truly thought about you, would you want to? If someone asked you for brutal honesty, would you hold back? These are powerful questions in general. I won't delve into them in that broad way here. But, as they apply to raw foods and the raw food diet, I'll continue. 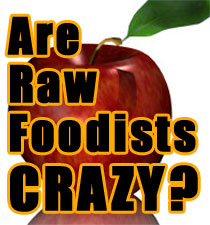 Mi compadres, I was given a GIFT recently. I was subject to, you might say, a sort of "intervention." Well, not really anything that formal. But, effectively, it functioned that way for me. You see, I received an unedited glimpse of myself through the eyes of others -- others who honestly believe I am at least partially insane(!), mostly for following a relatively strict diet of raw and living foods.

Don't get me wrong; this wasn't huge news to me. We've regaled you all before right here about the various social challenges you'll face if you decide to go raw -- things like endless jibes from coworkers, concerned questions from friends and relatives, warnings and other scare tactics from health care practitioners.

But, this was different. This was one of those, "Dude, we all seriously think you're misguided and basically in a cult"-type of thing. It was like being pulled aside by a good friend and told, "Look, I'm not going to name names, but lots of us think you've gone 'round the bend."

So, in a way, even though I always pretty much figured that most of my friends (well, the non-raw ones) probably thought this, this was a kind of confirmation. And, let me tell you: ?Psychologically, there's a major distinction between (1) supposing that people believe you're a little bonkers, and (2) actually hearing it straight from the horse's mouth, in no uncertain terms.

I'll be the first to admit that, at times ideology and practicality do not always mix pleasantly. I mean, for example, I recognize that there can be a bit of a cost (socially and otherwise) to following a raw diet. If my coworkers decide to go to a steakhouse for lunch ... well, I probably won't go. Yes, I know there's always a junky iceberg lettuce salad to order at even the most meaty venue you can imagine. But, most of the time, I'd honestly rather have a smoothie (which requires my going home to make it). If a person were on, say, some kind of corporate career-track, the cost of regularly skipping out on such networking opportunities might be significant. So, there's always a kind of balancing game that goes on, especially early-on in the process.

Obviously, Wendi and I are both of the opinion that there's nothing foolish at all about raw foodism. In fact, whether one is a raw foodist or not isn't necessarily the issue here. The issue is: Are you being conscious about what goes into your body? Certainly, not all "cooked" or "SAD" people are cognizant of the dangers of their diet, or they simply do not believe their diets to be harmful. But, if a person develops a true conviction regarding diet (be it raw foodism, Atkins, or anything), then it's indicative of some kind of problem when that person does not follow said conviction. ?The issue of pitting one conviction against another is a separate issue. We're proponents of raw veganism here (a stance that we believe holds up to any scrutiny -- be it scientific, moral/ethical, nutritional, etc.), and so that's what we're advocating, and that's what we're living.

Now, the word "crazy" has many meanings. Among other things, it can be a somewhat disparaging yet common term for mental illness (to be crazy), an adjective describing excitement (crazy-wild ambiance), an oft-used description for the infatuated (to be crazy about someone), and even a term of degree (crazy-good at something). I think it's pretty clear that I was told I was mentally affected. While I certainly have reservations about perpetuating such pejorative expressions, I nonetheless felt that the word captured the belittling judgment I felt in the above scenario. And so I approached others, explained my take on this, and put the question before them: ?Are Raw Foodists Crazy

All week long, we will be featuring responses from various raw foodists! Make sure to come back each day, starting tomorrow, to read responses from all sorts of people! There are some really great ones, ranging from short quotes to longer essays. It's super stuff, and all highly inspirational! :-)

I used to be BRUTALLY honest, until I realized, I was just MEAN.

Not everyone needs to know my closed minded opinion on things, especially since it is just a judgement call. I also don't like hearing other people's closed minded opinions. Last night on facebook, a new friend posted a picture of a fat person eating a hamburger and on his bare upper body were photoshopped some fast food restaurant tatoos. She posted the word "gross." It really hurt MY feelings to see someone being publically humiliated like that. If people think of me as "gross," or judge me without knowing my story, . . . I really don't want to hear about it. I would much rather not know.

Shea (of Monday Night Live) also had an intervention at one point. Her colleagues years ago got together to discuss her raw food habit. LOL. It wasn't very funny, but, . . . all we can do is laugh it off.

If you're crazy, so am I. *raises goblet filled with green smoothie* To being crazy about our own bodies!

Oh, I've gotten into trouble with over-honesty, too, from time to time. Once, I was watching a video on spirituality on YouTube... It was touting the virtues of being absolutely honest in all ways, at all times. It really resonated with me & I adopted this certain mindset that I would just say and do everything absolutely 100% honestly, not filtering anything I thought, did, or said. If I was absolutely honest, that would have meant that I was being my 100% self, and what could be more worthwhile? Well, it was a complete disaster. I do like the idealism and nobility of it, and would not write off the goal as unworthy. Perhaps it just takes *practice* -- and perhaps its also an exercise about self-awareness and how it IS easy for us to be judgmental. So, I do not think you're mean! Nor do I believe I am. Sometimes, as that song from the musical HAIR says, it's just "easy to be hard." Recognizing this, though, is HUGE!

This morning I saw that exact photo you mentioned, by the way, and shared your feelings 100%. He had a white bandanna on, right? I did not comment on it, as it was clearly making fun of that poor man.

Interesting that you are posting this experience today. I went to visit my parents yesterday afternoon. I was planning to go to a Pot Luck Raw Food Meet Up group after our visit, so I had my prepared dishes with me - a huge plate of "nacho cheesy kale chips" and an amazing spread that I make with cashews, spinach, garlic, tamari and lemon, that is served with sliced cucumber, sliced red peppers and some of my yummy flax crackers... I was prepared for the questions, because I had to bring the food in to my parents house to keep in the fridge. I live in florida - 2 hours in the car would have made for stinky, mushy kale chips!!!
So, the first part of our visit was about the food - I urged my parents to try the food, and they actually did like it. Surprise, surprise!!!
But the second half of our visit brought up a discussion related to the new Trump Network that my family seems to be very excited about. My mother made a comment that the products were for "mainstream" America - not "fringe" or "extreme" people. Now - I recognize the reference. Yes, I am a fringe person - I am OUT THERE - yet, I am SO STRONG and HEALTHY! The only person in my family with beautiful, clear skin (at 48 years old), no medication, and none of the family "issues" that seem to be a part of all of their lives. I'm so THANKFUL to have listened to my inner guidance and intuition that led me to the raw food lifestyle.
I too encounter the inconveniences related to functioning in corporate america. I travel frequently and make it a point to search out the local health food stores, shop at Whole Foods and keep food in my hotel room...everything I can possibly do to support my lifestyle choices. Some of my co-workers give a jab or two....some of my business associates have made silly comments, but none of them have ever swayed my conviction.
My personal physician is an MD and specializes in Integrative Medicine. His comments have been mixed - worried about me getting sufficient protein (lol), wanting me to take supplements I don't really need. BUT - the other day, he told me that my bloodwork is PERFECT :-). And he stated that my lifestyle and food choices are exactly what this world needs and would someday be the norm. He said, "Robin, you are the future. Share this with as many people that will listen"....

Love what you and Wendy are doing! Hope to meet you in person some day!!

This is gonna be really good Jim. Looking forward to seeing what others have written! ;-)

I don't understand why is it a "judgement call".

The way he was eating is gross. His body is gross.

Someone has to tell it to him cause he obviously does not see himself as gross.

Love yourself yeah, but not "blindly"

Why has the "story" of someone have to come up. I don't see that coming when watching a motivational video.

The nike ad basketball player in a wheel chair. He gets to "judge" everyone, because he is handicapped ??

So whats the message, you better be worse of than me, then only I listen to you?

Replace the "overweight" with just someone who does not take a bath so he stinks.

I can tell enough people will get angry at you for being "honest" about it.

If that "fat Mcdonalds" man is not willing to "hear about it" its his loss. He was looking at himself in the mirror everyday and it still did not hit him in the head.

When people were not being honest or as you say "judging" him, he never realized that he looks gross, So i don't see anything wrong in "humiliating" him a little to inspire other people.