A flashback is a psychological phenomenon in which an individual has a sudden, usually powerful, re-experiencing of a past experience or elements of a past experience. The term is used particularly when the memory is recalled involuntarily, and/or when it is so intense that the person "relives" the experience, unable to fully recognize it as memory and not something that is happening in "real time". ... Because there is a strong emotional component to memory as well, flashbacks can occur as a rush of feelings, emotions ... and/or sensations. ~from the Wiki article on Flashbacks

Three or four years ago, I decided to make my own wine. Our very good friends J.T. and Kelly (our first friends in Pittsburgh!) offered some advice, as J.T. had been into wine-making for years. He's pretty good at it, hand-pressing tons of fresh grapes each year. For my purposes, he recommended starting with pre-pressed grape juice. There's a place in Pittsburgh called PenMac's that, for a limited time each fall, will hook you up? with a six-gallon bucket of California cabernet sauvignon (or other variety of your choice) grape juice for about $40. So, I bought the cabernet as well as some supplies. In no time, I had a 6-gallon glass carboy of red wine, airlocked and aging under our basement stairs. 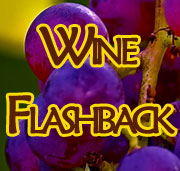 Fast-forward several years and guess what ? I'd done nothing with it. And, to complicate matters, I'd since made the personal decision that I didn't want to drink any longer. But, you know... I still had the equivalent of 25-30 bottles of wine sitting there (which is, after all, technically a raw food!). I didn't want to just waste it. So, I gave it to a friend last week.

Before she took it home, though, we figured we'd better test it to make sure it was actually still drinkable wine. For all I knew, it could have been spectacular wine or awful vinegar!? We removed the airlock and poured out maybe an ounce, splitting that into two coffee mugs. The good news is that it was most certainly good, drinkable wine. It hadn't turned bad in all of those years! So, my friend should be able to get at least 25-30 bottles of decent red wine out of the deal!?

But, the interesting thing to me was the experience of tasting alcohol for the first time in nearly two years. It was ... very strange. Perhaps I should have known better, having relayed that story linked to above about feeling a little weird after simply pouring some old beer out. But, I paid no mind to that and simply drank the half-ounce sample (actually, it was probably less than half an ounce!) to see if it was good. I quickly felt very weird -- not drunk, but ...do you know how alcohol can have a pronounced warming effect? I didn't like the feeling. In fact, I made myself an "emergency smoothie" from an orange and some frozen blueberries in an attempt to reverse the spell. (And, btw, I think only a fellow raw foodie could appreciate the humor of the concept of an "emergency smoothie.") About a half-hour later, I felt normal again.

I think that raw food really purifies the human body -- especially if you really strive to be as "high raw" as possible and to avoid other ingested toxics (e.g., pesticides, GMO foods, additives, preservatives, etc.). I could envision two points of view about this: One person might say this is clearly good because of the undeniable health benefits. Another might make an argument against it, citing things like social difficulties (e.g., if you only ever eat raw, organics -- to the point of being physically sensitive to anything else -- then what if you want to go to a restaurant with friends ). Well, I'm not here to debate that question or to cast judgment upon anyone for what they do or don't eat or drink. I really only wanted to share that odd food-related experience with you and perhaps make only passing reference to any related controversy.

In any case, it does also makes sense to me that we can be highly sensitive to things even in very small amounts. Wendi, for example, has always had intense reactions to various scents and chemicals. Driving through a highly polluted area, for example, could give her a wicked headache. I've met others with this sort of sensitivity as well (although strong smells usually don't bother me much). But, when you think about it, even a small sip of something probably exposes your body to much more of a physical compound (as measured by weight) than would be breathed in if it were in the air. So, it makes sense to me that, if one develops a sensitivity to a substance, it might take only very little of it for an effect to manifest -- even a whiff of something airborne or a half-ounce of homemade cabernet.

Ack! Forgot to credit the image photographer! It's from Flicker user def110, via creative commons.

Interesting.... I'm with Wendi, scents just about bog me down, really drain me when I'm around someone with that crud on them. I used to love it. Weird!

Interesting! I can totall relate to that "warming" feeling when you swallow wine. I made the decision to stop drinking wine about a year ago - actually prior to going raw! And over the course of the past year if I've tasted someone elses wine, just one sip brought me right back to that yucky feeling. I'm so glad you posted this! I thought it was just me - like an allergic reaction or something like that.

I have never been much of a wine drinker, although I have had some that I thought were really good. It will give me migraine headaches unless it is organic, or without added sulfates. So over the years, I wasn't interesed in drinking. But a thought on being sensitive to smells, I learned from research into Candida, which I suffered from and fought over the years, is that some smells, like tobacco and such, can cause a reaction in your body if you have Candida overgrowth. Sometimes very strong reaction. Although at the same time, smell is actually particles of the substance you are smelling, so taking something yuky into our bodies can cause reactions no matter what.