Is Hypnosis Good for Weight Loss? 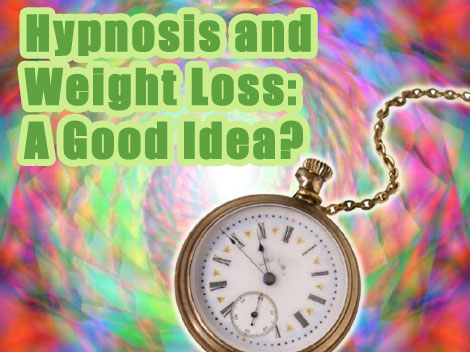 Recently, the wife of a friend of ours decided that she wanted to lose 20-25 pounds. As far as we know, she follows pretty much a "Standard American Diet." We've heard that she doesn't care for red meat, but she does eat other meats, plus a good deal of dairy (which, we believe, she regards as a healthy food choice). She's apparently tried a number of exercise regimens, and a few fad diets, with no luck on losing these 20-25 pounds. (Frankly, we haven't seen her many times, but would not have guessed that she had 25 pounds to lose. But, we'll save "self image" as a topic for for further posts.) In any case... Frustrated, she decided to see a hypnotist!

Our friend accompanied his wife to the initial consultation. He said it was actually interesting. The hypnotist basically sits you down and walks you through some fundamental psychology, demonstrates a few of the primary principles of suggestion (e.g., showing you how easy it is to, say, imagine the sourness you would experience when biting into a slice of lemon), and then lays out how the program works.

From what we understand, it's not the dramatic, stereotypical, mesmerizing process that you might imagine (thinking of Hollywood scenarios). Rather, it's simply using your mind's power to help. In our friend's wife's case, for instance, one particular goal was to surmount her apparent inability to pass by her boss' candy bowl each day for a handful of peanut M&Ms. That sounds simple enough, right? 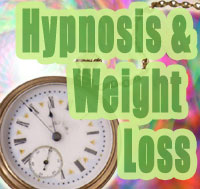 In cases like this, it's probably a worthwhile idea to try hypnosis for things like avoiding foods that are clearly junky. But, one of our concerns was this: What else are you going to try to "program" yourself to do (or not do)? "Program" may be too strong of a word here, and possibly not as precise as it should be. After all, it's widely said that you can't be forced, under hypnosis, to do anything that you wouldn't ordinarily do. On the other hand, how many of you, like us, have attended hypnotism stage shows in which audience participants are routinely made to act like animals (among other crazy hypno-tricks)? Still, when we say "program," below, you might think of it as a type of deeply-intentioned encouragement, if that suits you better.

In either sense -- programming or encouraging yourself, we'd like to share some additional thoughts to ponder. If you're going in for weight loss treatment, you must also identify what it is that you and/or your hypnotist think of as a healthy approach toward this goal. Here are just four example approaches (and there are likely many more that should be considered):

1. Are you going to attempt to program yourself to simply eat *less* (but sticking to your same diet) While there are merits to calorie restriction regimens in general, we dislike this approach for most people. After all, a SAD diet is fairly devoid of nutrients to begin with. Why lower your nutrient intake by eating less? A better approach would be to try improving your diet first. Since you're here at Pure Jeevan reading this and plan to pursue this avenue, consider talking with your hypnotherapist about the goal of incorporating more healthy, organic, raw foods into your daily life. If you're not following a healthy diet at the moment, you may be surprised at how few calories fresh raw vegetables have. So, simply eating less may not be the best answer to reducing your caloric intake! Raw allows decreased caloric intake and increased nutritional intake.

2. Are you going to attempt to program yourself to eat largely the same diet, but cut out junky indulgences (cakes, ice creams, etc.) This one is better but, again, we suggest an additional goal of adding in healthy raw foods as well. For most people who are considering hypnosis for dietary reasons, the goal is weight loss. Odds are, most people in need of moderate to extreme weight loss have dietary issues beyond the standard indulgences. So, again, be sure to look at improving your basic diet as well.

3. Are you going to attempt to program yourself to change your overall diet to something healthier and then stick to that regimen Aha, now you're onto something. Perhaps read through the thousands of raw food articles on this web site and set a goal of attaining and sustaining at least a moderate- to high-raw dietary lifestyle! At a minimum, also try limiting (to the full extent you're able) your intake of meats, dairy, sugar, wheat, processed and other notoriously bad-for-you foods. For most people, that will make a world of difference. If you can completely eliminate those things, so much the better!

4. Are you going to attempt to program yourself to exercise more Here at Pure Jeevan, we advocate a holistic approach toward optimal health. For each domain we discuss here (mind, body, spirit, emotion), we feel it's important to truly identify the most rewarding path for each individual. On the physical health side, exercise is a wonderful part of a holistic approach to health. So, yes, do try to exercise more. But, if that's your main approach toward weight loss, realize that you'll achieve your goal much faster and more healthfully if you're powering your body with the right fuel. So, again, discuss ways of reminding yourself to incorporate more healthy, raw, organic fruits and vegetables!

One of the concerns we have after the (admittedly limited) experience we've had with this method of weight loss is that, in the case discussed above, the patient wound up taking health advice from a hypnotist. This makes us a little nervous. ?In the case discussed, the hypnotist not only facilitated the traditional "programming" aspects of her treatment, but he also had his own ideas of what constituted a healthy diet; ?he recommended various foods, snacks, supplements, etc. While certainly well-intentioned (and likely very helpful for many people), it's really better to identify what your ideal diet is first, in cooperation with a trusted nutritional professional, and then ask your hypnotist for assistance in tapping into your mind's amazing power in order to adapt yourself to that better dietary lifestyle.

Bottom line: In our view, there's nothing wrong with adding hypnotism to your toolbox of things to use in your pursuit of health. But, if you're going to, say, attempt to stick to a certain dietary protocol, it's probably best to ask for help in sticking to something that you're more informed about rather than just taking a random stranger's word for it. Oh, and by the way... What does it cost? In the case we outlined here, the rate was $80/session. Our friend's wife committed to five sessions ($400), although the hypnotist was recommending seven for the suggestions to really take hold. When we find out how well this worked, we'll update this post.

Woo Hoo!! Jim has been finding snippets of time to write blog entries! This was a fun read and I'm looking forward to reading what others think about it. Right now, I need a hypnotist to convince me that it's not too hot/humid here in Pittsburgh! ;-)