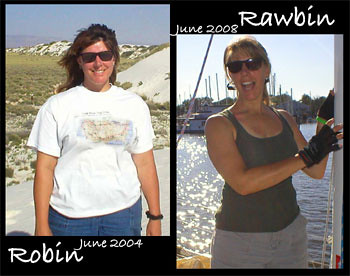 Throughout my youth I was thin, active, energetic, and healthy. I could eat anything I wanted. There were four of us kids, (I was the baby) all involved in different activities during the day, but as soon as Dad came home from work each evening, we'd all gather together for dinner. We sat at the table to a serving of canned fruit, cooked veggies, meat, and starch on each plate. Mom cooked it, Dad served it up, carefully dividing it between 4 kids and 2 adults. We had to eat fast to make sure we didn't miss out on seconds. There was rarely any left over. We didn't often have dessert, but we always celebrated happy events by going out to eat or by having a bowl of ice cream. Looking back, I think that to me, food was comfort; it represented tradition, family gatherings, celebrations, happiness, success...

When I married & moved away, eating out ceased. We didn't have much food, but I gained weight quite well when pregnant with 2 children. I lost much of the weight during a separation and divorce. Once I remarried, eating was good. We ate out often and we ate well. There was frequently an excuse to eat out. We usually had dessert most weekends and sometimes midweek. By 2004, I had grown beyond 200 pounds. That fall, I had my first attack of diverticulitis (severe pain, intestinal bleeding and blockage). I was hospitalized for a week on antibiotics and clear liquids. A year later, I started to have progressively worsening intestinal infections, repeating monthly rounds of antibiotics. I felt a bit better on clear protein drinks. In spring 2006, because of my illness, I lost a few pounds per month. I was frequently on antibiotics but was feeling exhausted all the time. I opted for the partial colectomy in August 2006, removing 1/3 of my colon, as well as my appendix. They discovered a gastrointestinal carcinoid tumor, which supposedly "increases the risk of forming other cancers of the digestive system". 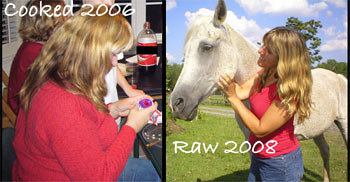 I was back in the hospital within a month for severe abdominal pains. Back on clear liquids. Back on antibiotics. It seemed that I also had endometriosis and the scar tissue was choking off my intestines, which had caused the perforations and diverticulitis. I began to notice that I felt my best when I just plain didn't eat.Six months later, still having digestive troubles, I had a total hysterectomy. It helped some. Although I cut out wheat and added pro-biotics, I still had stomach aches/painful digestion daily. The last surgeon said that I should try to put off my next abdominal surgery for as long as possible. "What next surgery " I thought this was it. I was done, right? He explained, that he had seen my intestines and there will be another surgery.

Due to allergies, I started cutting out foods that seemed to trigger pain and indigestion. First I cut out all glutens. For years I knew I had a lactose intolerance, but suddenly I couldn't tolerate any dairy. I was told to eat a bland diet of soft foods; white bread, no salads, just overcooked veggies. I was tired, irritable, foggy headed, achy, had poor color, acne, itchy skin, dry brittle hair. I was craving salads! I felt I wasn't getting enough from the nauseating broth or other clear liquids. I was looking for something different. I started making green smoothies. I'd add some greens to my morning protein shake and immediately felt less wiped out. 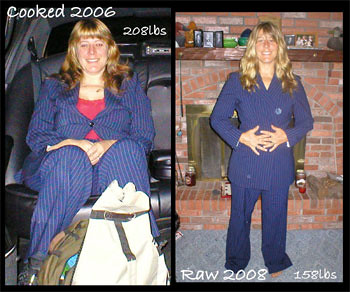 I was working with a girl (Shannon) who was into some crazy diet. She kept talking about how she was only eating raw food! I didn't think much of it, "Like, where do you get you protein ?"

Then, in August of 2007, I met Brigitte Mars at the Women's Herbal Conference. I bought her Rawsome! book and video and I quickly switched to about 70-80% raw. By December (when I discovered the support on GI2MR) I began to cut out all dairy, grains, and meats.

I've noticed that the days after I eat entirely RAW, are the days that I feel best. I have lots of energy and I'm pain free! I began to set daily goals of 100% raw. I hit it most days.

I'm taking in large quantities of fresh greens and I've discovered how raw food makes all the difference. I've had acne since my teen years, but now I can't remember when I last had a bad spot. My hair doesn't need washing nearly as often, but it's shinier and it's not breaking off as much. I used to have trouble sleeping and now I'm not waking with numb limbs and achy joints. My fingernails are not thin and brittle. For the first time in many years, I've got lots of energy, a happy belly and a positive outlook. My food tastes better, I don't eat as much. I'm less hungry. I'm full faster. I take great pleasure in preparing, arranging, tasting, and eating my food. 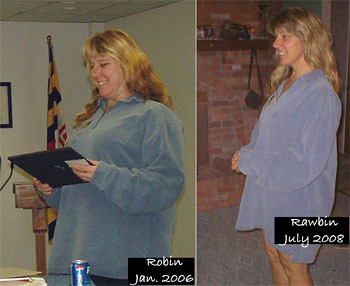 I'm down from 208 to 168 and this has granted me feelings of self worth and happiness that I remember from my thinner days.

For those who have actually read this far, I'd like to thank you for letting me share myself with you. I came across a video today. I've listened to this song before, but never actually considered the words or visuals that the artist chose. I felt a connection with it: Exposed and alone, yet loved and renewed.

I'm 5'5" tall and of a small/medium skeletal frame. According to doctors I should weigh between 120-130 pounds. My top weight was 210 (before I stopped looking at the scale) and I'm currently at 156.

I've shed 20 pounds by cutting out meat, dairy, and cooked grains. I shed another 30 by adding in raw fruits, raw vegetables, raw nuts and raw seeds. A total of 50 pounds eliminated and not a single stomach ache on my 100% raw days.

You can find out more about Rawbin Anderson by visiting the following sites:

You look Beautiful! I have to say, I found it rather difficult to become 100% raw, especially since my husband was still a fan of "cooked." I'm grateful for sites like this, which offer solutions for those looking for friends. BTW, a great place for more recipes and fellowship with raw foodists is Raw People. their alternatives to pancakes is amazing! http://www.rawpeople.com/ utm_source=A&utm_medi...

Pipi Rawstocking I salute you!!!!! With the path you and your gut was on, you may not have been here for us to love and admire.. so I am thrilled that you found healing and happiness on raw.
More time for us to have fun and hijinks together!!
Ride on sister,
love you big
deb

Awesome! Rawbin you rawk! Thanks for sharing.

So your friend and you attending the women's herbal conference got you huh? Excellent!

I too, had a turning point recently in my life by attending a Mind, Body, Spirit event summer '08. I used to eat raw but also dairy years ago following the Airola diet but trying to feed a husband and kids I gave it up. I knew it worked, but I just quit following it. Wow, looking back if I had not have quit that I'd have likely been on the 100% raw foods a lot sooner, but hind site is 20/20.

Like you, I was always thin but over a period of a few years eating out I put on 60+ pounds and couldn't figure out why. (duh on my part!)

Point is last summer I began shedding weight just by changing my snacking habits to raw wholefoods. A couple months ago I really dug into this raw food lifestyle and just prior to Jan 1 of this year set a goal, as you did, to be 100% raw everyday. I want to be like you Rawbin healthy and vibrant!

Thank you for sharing your story Rawbin! I'm so touched by all the transitional stories I hear...they are so wonderful, deep, touching, and inspiring! I'm glad I'm a part of this community to share your healing and raw transformation. You look fabulous, and you provide so much support to the raw community! Thank you, thank you...Peace! :)

FASCINATING! SO INTERESTING THAT 100% EQUALS 100% HAPPY TUMMY. THEY DO SAY YOU CAN'T COMPROMISE WITH 100% RAW IF YOU HAVE A SERIOUS HEALTH PROB. YOU'RE A LIVING, WALKING TESTIMONY TO LIVING FOODS. FANTASTIC! CONGRATULATIONS! YOU LOOK ABSOLUTELY AMAZING IN THE AFTER PICS BUT IT'S PRIMARILY THE HEALING OF YOUR HEALTH PROBLEMS THAT'S SUCH A CONSOLATION AND INSPIRATION TO ANYONE OUT THERE WITH SAME. THANK YOU FOR SHARING IT WITH US ALL.
LOVE AND PEACE

Hey, thanks for all your support. I noticed that the links were missing for the music and lyrics and I didn't remember what they were, so I looked it up:
Lyrics:
http://www.azlyrics.com/lyrics/alanismorissette...

I love you Rawbin!! Not only do you look amazing.....you ARE amazing. Your story is so inspirational and your life is an example of what raw food and a great attitude can do in one's life. Can't wait to see you again soon!!
xoxo....Penni