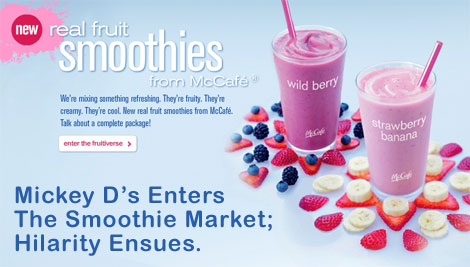 Driving to work today, we noticed that McDonald's has launched its latest product aimed at the health-conscious demographic. In case you haven't heard, you can now purchase fruit smoothies at Mickey D's! Sounds like real progress, right? Well, let's take a closer look and see if they're really as healthy as they sound.

McDonald's is not exactly known as a healthfood destination. After all, a typical lunch at the Golden Arches these days might well include something like an Angus Bacon & Cheese, Large Fries, and a Large Coke. ?Together, that's 1,600 calories, 64 grams of fat, and 2,400 mg of sodium, 99% of which is from highly cooked, highly processed, non-organic, factory-farmed, nutrition-barren source materials . (Add on another 75 calories and 550 more mg of sodium if you plan to go through, say, five packets of ketchup along with those fries.) (Source) And, some people eat that daily! 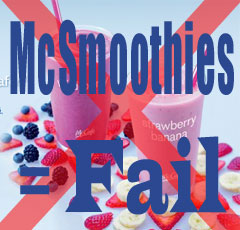 Clearly, the majority of "food" that fast-food restaurants market is unhealthy. (We've all seen "Super-Size Me," right ) Not surprisingly, these chains eventually became embarrassed about this and, without altering any of their artery-cloggers, embarked years ago on a huge public relations campaign to reverse the negative image that had begun to take hold among the general population. It was a slow and deliberate campaign, probably dating back even further than, say, Kentucky Fried Chicken shortening its name to KFC. Whatever reason Colonel Sanders gave for it, it was quite obvious the move was intended to distance the company's image from the negative implications of the word "fried."

Later, we saw the introduction of more salad features at these restaurants. They never quite qualified as anything that we here at Pure Jeevan considered decent salads (e.g., they tend to use just the basics, and usually on top of practically nutritionless iceberg lettuce -- and never organic). And, it should be noted, the big sleight-of-hand in that case was the introduction of rich, creamy, fat-laden, high-calorie dressings. So, consumers feel good about having "just" a salad (feeling strangely, surprisingly full afterward), yet never realizing that the salad selection was not appreciably any more healthy than whatever they used to order from the same chain restaurant. ?Often, the salad is worse! This phenomenon remains true to this day, of course, and is especially troublesome at some of the more upscale sit-down places (think Applebee's, Chili's, TGIF's, etc.) where the nutrition data on the salads is nothing short of eye-popping (and, to be truthful, belt-popping).

The word "smoothie" has long been associated with the health movement -- Wikipedia has a fairly decent, brief, background on the word -- ?as a healthy alternative to the much more popular milkshake. But, a smoothie is different, right? It's not about the sugar and the dairy, right? A smoothie is a celebration of the wonderful blended treats that can be whipped up out of nothing more than what nature has provided (well, assuming that nature has provided you with a decent blender). With that in mind, let's take a look at what's in a McSmoothie!

Isn't it ironic, and quite sad, how smoothies have come full-circle now? With this Mc-version, it looks like they're officially back into the mainstream consciousness, and containing all of the things (namely sugar, dairy, artificial flavors and, come on ... gelatin !) that they seemed to have been designed to avoid so many years ago. Add to that the fact that both the Strawberry Banana and Wild Berry both feature many of the most pesticide-laden fruits currently produced. And if no one cares about that, fewer may care about the bovine growth hormones likely present in that factory-farmed milk (which is not disclosed on the page). At this rate, smoothie drinkers may as well order up the milkshake, which is likely what they truly want in the first place!

We're afraid that a battle has been lost here. The health-conscious no longer have claim to the term "smoothie." It's been co-opted by the corporate world once and for all. And you know what? ?Let them have the term. We here at Pure Jeevan are calling for a new term. We don't yet know what it is, but it has to be something different, something perhaps less catchy and something that won't be appropriated by The Man after it catches on. Any ideas ?? Let us know yours!

Up Next: Not ALL chain-smoothies are awful. Jim reports on staying raw vegan at a huge chain!

Shameless Vita-Mix Blender Plug: Are you thinking of buying the most powerful, amazing blender in the world? If you're serious about making smoothies like we have for 10+ years and still running strong on the same amazing unstoppable powerhouse -- the Vitamix Blender -- then please purchase it through our link: ?http://tinyurl.com/vitamixdeal. For free shipping on your order, you must use coupon code 06-003684. (We'll get credit & you'll get free shipping! Thanks!!)

Wow, not even vegetarian! (gelatin...)

I always find it funny that companies are now going out of their way of stating that they're using "real" fruit (or veggies) in their foods. It's so sad that we now need to state what is and isn't "real" food in our food!

I'm sticking with home-made smoothies, myself. They are 100% organic, delicious, and made with love! :-)

Yes! Isn't that just so gross ! Why would they add gelatin, anyway? Maybe they're using a lot of water and they need the gelatin to make it "smooth" like a REAL smoothie

I have no idea for a new name for smoothies...it would be great to have a different one, though, to step away from the newly tainted original one.

I'm so happy to see you back.

I'm trying to think of a new name for a smoothie with you. So far, just lame nemes have crossed my brain. I'll keep you updated.

I remember one time I was at a mini golf, and there was nothing to drink for me. So the lady at the counter said she could make me a non alcoholic shake with fresh strawberries, and it sounded good so I said OK. Well, the "fresh strawberries" were frozen, thawed strawberries in a plastic containers. My husband and I looked at each other at the same moment and pretty much had to laugh... nothing else we could do ;)

Hi Wendi,
Thanks for the heads up on the ingredients. We just received a coupon for a free McDonalds smoothie that will be shredded with all the rest of our junk mail. . . I should have known!
Susan

How about "Fruithies"! Makes sense, as fruit is usually among one of the main ingredients, although not always.

HOW ABOUT "FRUIT BLEND "