What Are Negative Ions, And Are They Beneficial to Human Health?

Today is Wendi's Birthday, so please join me in wishing her all the best for the coming year! Since this was our first year in Portland, just an hour-and-a-half's drive to the Pacific, I'd known for ages what we were going to do to celebrate Wendi's birthday -- a picnic at the beach, of course!

A few days ago, the weather reports for the central Oregon coast cities unanimously agreed: Rain! ?But, after living here for a few months, one learns that a forecast of rain *never* means that it's going to rain all day long. Rather, it just means that it'll likely rain at some point, or at many points, in a given day. The rest of the time, it could very well be perfectly sunny outside!

Knowing this, we ignored the weather reports and headed West. It poured down rain as we drove through the windy valley roads closely edged on each side with beautiful towering pines. What an inspiringly beautiful ride! And, when we reached the beach, guess what? ?No more rain! ?See, you have to live here for a while to understand how the game works. :-)

Here's some video from the day -- nothing more than a quiet look at the ocean. I'm posting it for a reason, though, and I'll get to that below. For now, click the vid as you continue reading this article.

Yes, it was chilly at times today (reaching only the 50s). But, we all felt happy and relaxed upon returning home. ?Sure, it was a fun outing, and that was probably the main reason. But, what about breathing in all of that fresh air all day, which purportedly contains mega doses of negatively charged ions. ?Have you heard of this phenomenon?

It's somewhat confusing to learn about ions and their potential health effects. That's probably because there is (1) the scientific definition of an ion, on the one hand, and (2) the conclusions drawn from that fact on the other. So, let's start with the definition. Quoth the Wiki:

Beyond that definition, it's all chemistry (which is often how it works in the health field -- scientists agree on what a protein is, for example, and then arguments ensue ad infinitum regarding whether it's panacea or poison). Such is the case with ions as well. While there doesn't seem to be any scientific debate as to the existence of ions, or regarding the concentrations of ions in certain places (one being on or near the sea), opinions tend to vary widely with respect to any health benefits. 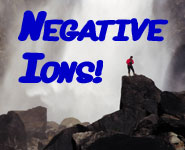 As the theories go, though... What you generally want to surround yourself with (breathe in, bask in, bathe in, etc.) are the anions -- the negatively charged ones. Of the numerous phenomena related to all of this, the main ones tout cleaner air (based on the theory that the negatively charged particles bind with positively charged pollutants and particulates, which then fall to the ground and leave behind particularly fresh air) and physiological effects such as improved cellular functioning, improved oxygenation to your cells, and many related psychological benefits (many with related physiological causes).

Says one article: "There's something in the air and while it may not be love, some say it's the next best thing -- negative ions. ... Negative ions are odorless, tasteless, and invisible molecules that we inhale in abundance in certain environments. Think mountains, waterfalls, and beaches." Source In the video, above, you can mostly hear the wind, but also the waves breaking near the shore. This action is generally considered highly ionizing to the local environment!

I also liked this article for another balanced look. ?One can only agree with that author's conclusion: "Although the effect of ions on human health is still being debated, most people would agree that breathing fresh, clean air is good for ones health."

There's more to this issue, of course (most notably the debate about whether electronic ionizers have any merit). ?We can't really answer that one, as we've not personally tested these devices. However, the bottom line is this: Get thee to the beach or to a nearby forests -- feel the love nature is bestowing upon you. Ions or no ions, this activity has little or no cost involved, and you'll probably have a good time, which alone is always good for the body and soul. :-)

(By the way, if you're new to the Pure Jeevan family, you may get a positive -- scientifically known as a cationic -- charge out of taking a look at a special birthday surprise we all did for Wendi back in 2009. What fun that was -- still makes us smile!)

I just realized that I forgot to add in my own personal take on whether there are actual health benefits to negative ions. To pre-qualify this, I'll just say that this is just my own opinion, and has no basis in science: Yes! Yes, I think there's something to it. I think there is something special to breathing deeply near the ocean, in forests, at the bottom of waterfalls.

As for electronic ion generators... I'm really not sure. Breathng in something generated by an electrical device just doesn't seem special to me, no matter how equivalent it should be in theory. So, personally, I don't think I'd invest substantially in one, although I should note that many are available on Amazon.com for under $50. So, if you bought one and placed it discretely in your home, it probably couldn't hurt. But, those huge, clunky models just seem strange to me. You may get more negative ions by simply opening a window from time to time. Again, that's just my opinion. I'm open to hearing ion generator testimonies, pro or con, from anyone who cares to comment.

(That was Jim commenting, above.)

Happy Birthday to the ever groovy Wendi! Hope it was great!

*giggles* Thanks so much, Heidi! It was a great time! :-) XOXOXO

Ooh! Another secret to your beautiful hair! ;-) XOXOXO