Pardon the video quality there. A.J. and I shot that video at night and, although it looked decent on the camera's preview screen, the actual video came out almost totally black!? However, with a bit of video processing, we were able to salvage it. It's not optimal video, but it's at least watchable (and, hey, also conveys a little of that nighttime festival feeling).

A quick note about veganism before I share some additional info... As we've stated here many times, Pure Jeevan advocates a raw vegan lifestyle. What do we intend that to mean, exactly? Well, strictly speaking, veganism excludes all animal products, both in terms of diet and lifestyle.

I think we can all agree that pretty much anyone who calls him or herself a vegan consumes no meat or dairy products. That's pretty much the baseline of veganism, in my opinion. However, complicating this matter, many people who consume no meat or dairy may utilize various other animal products (although, one hopes, minimally, rarely, and/or at least consciously and responsibly). For example, if someone who does not eat meat or dairy purchases a wool sweater, what does that mean?

And so you then enter into the realm of exceptions, justifications, rationalizations, labels, etc.? Like so many things in life, it simply boils down to the subjective. I can tell you, on a personal note, that Wendi does not consume any honey or bee products. And so she would not consider a honey-sweetened raw chocolate bar to be vegan. (And, technically, I think she'd be correct.) As for me, I'm not as strict when it comes to things like honey (although I rarely consume it) or wool (especially when harvested with respect and in a non-harming way).For A.J.'s view, you can watch the video, because I did ask him about this (Raw Spirit being billed as a "raw vegan" venue, after all!).

Anyway, I thought I'd also share kind of a funny story here today, since the video talks about raw chocolate. You see, on the Saturday during Raw Spirit, Vanessa Barg threw a chocolate party at Java Green in Washington, D.C., for her boyfriend Jeff Skeirik (the "Rawtographer"). Vanessa is, of course, the founder of Gnosis Chocolates, which has been a supporter of Pure Jeevan from the early days. (Vanessa supplied Gnosis bars for the attendees of Wendi's raw spiritual ashram retreat a few years back.)

From across the way, I heard, "Yes, they're delicious!"?

It was Vanessa. And then I thought to myself, "Way to go, Jim... Here you are at Vanessa's party, and you're talking about a competitor's chocolate!" (Are feet raw ? Because, I had a serious "open mouth, insert foot" moment there.)

No harm done, though. I had a great chat with Vanessa after that. I honestly don't know her very well, and wasn't sure how she would take to a situation like that. So, I went over -- not to apologize, but to at least, for what it was worth, let her know that I adore the Gnosis products! But, you know what? She was really great about that. Not only was my social faux pas a complete non-issue, but she shared her philosophy on the matter as well. She said that she's highly encouraging of new raw chocolates on the market.

I loved her philosophy on the issue. To boil it down, it reminded me of that old maxim: A rising tide raises all ships. The more raw chocolates the world has, the greater acceptance they'll all receive in the marketplace, and the larger this market will grow (who knows... maybe even reducing, to some small extent, the amount of sugar-laden, non-nutritious junk-food candy consumption in the world). 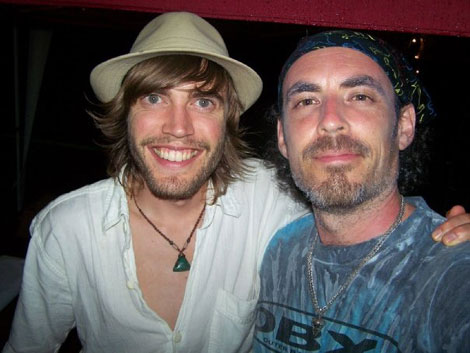 That was an interesting point to bring up, whether honey could be considered a vegan food or not. I guess I never really thought about that before. Mostly I would acknowledge that I personally need to be pretty spare with anything sweet I eat, just because of how I used to eat. I guess I'd say that if bees are kept in the time honored way, they are not caged up or imprisoned or anything, so I wouldn't personally have a problem with honey. I think each person needs to follow their conscience though.

Despite the poor video quality, the information about why Aj uses honey was great. I really enjoyed his chocolate, especially the wild spice flavor which I think was your favorite too.

"I think each person needs to follow their conscience though."

Yep... And, at least we can all probably agree that most vegans, whether or not they ingest honey or wear wool, are extremely conscious people (relatively speaking) in terms of how they interact with their environment (including all of the animals & insects involved).

I have heard nothing but rave reviews on A.J.'s outrageous chocolate creations! Thanks for all the info and I can't wit to do a taste test!

You won't be disappointed. Know what else I'm dying to try? That "Merlin's Elixir" bar that Jeff (Natural Zing) and Vanessa (Gnosis) came out with lately! I meant to sample one @ RSF & never got around to it!

I believe so firmly behind that philosophy - there is NO such thing as competition when it comes to *conspiring together* to shift the market place ;)

"ChocolateGirl," eh ?? Hmmmm... Well that name's just too easy to pin down. Thanks *Vanessa*! You're a fine chocolatier and a real role model for a more conscious approach to business. The word needs more people like you out there! -Jim

I have heard nothing but rave reviews on A.J.'s outrageous chocolate creations! Thanks for all the info and I can't wait to do a taste test!

I stand so firmly behind that philosophy - there is NO such thing as competition when it comes to *conspiring together* to shift the market place ;)