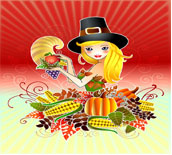 Mostly, I've only ever seen this in movie families. But, something in me really does like the idea of some kind of tradition along these lines. I'm drawn to the more ancient, broader historical significance of giving thanks to the land and to Mother Earth and in fact to the providence and grace of the whole Universe in special annual recognition of everything we've received over the past year -- another cycle complete, marked by the year's final harvest. This is yet another reason -- and we've stated many, many such reasons here over the years -- for getting back in touch with the Earth, for learning more about how wonderful plants are, and for reeducating ourselves about what constitutes real food and real nourishment.

If some of us in society can, even in our largely disconnected states, manage to feel some appreciation annually during a holiday specially entitled "Thanksgiving," imagine what the world would be like if a much larger percentage of people actually took part in growing their own food! Imagine the reverence then -- the honest, deep sense of gratitude that we would all feel, the new collective respect that might emerge for the stewardship we have for the land. No longer would grumpy old Uncle Bob groan and reluctantly force himself to come up with something he's thankful for during his "turn" in the spotlight. Instead, he would light up and enthusiastically, proudly state, "I'm thankful to have had the priviledge of caring for that entire field of pumpkin plants all season long, for watering them daily, for enriching the soil through my application of organics and biodynamics, for preserving and respecting their genetic code via these means, for simply walking among my leafy, viney friends all season, watching them produce these delicious, amazing pumpkins that we'll enjoy all winter -- and I'm thankful that they supplied us with seeds so that we can repeat the process yet again!"

Personally, I'm very excited, as you can tell, about just the prospect of growing more of my own food. So, I'm very grateful that my life is heading in that direction. (I'm also personally grateful for a ton of other wonderful things in my life!)? And we're grateful for the lessons we're learning along the way -- lessons like the rewards of living simply, and the necessity of living with patience. Wendi and I also spoke last night about how grateful we are to have made so many wonderful friends via Pure Jeevan. To us, you're family. The whole raw food community is such a pleasure to hang out with, to interact with, to learn new things from, and to teach what we've learned and discovered! We're very grateful to be in a position in which our lives will soon be dedicated to this community full-time. So, have a super Thanksgiving everyone -- or, as we all like to say in raw circles, have the Best Thanksgiving Ever!

I'll leave you with a shot of a past Thanksgiving meal, a raw feast prepared by Wendi back in 2007 (I think). Looks like she made stuffing, a spinach salad, "turkey" nuggets (from a recipe she found online somewhere), a soup, some crackers, some nog -- and I'm not sure what was in the glass bowl (appearing to be shredded white stuff). Mmmmm, that stuffing was tasty. Haven't had a good raw stuffing in a long time! 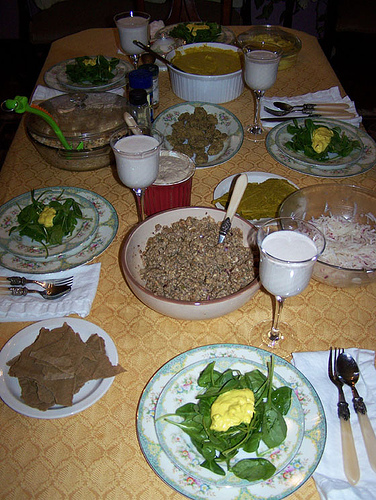 It's funny how the things I want to do with my family are often only seen in movies. I guess I must be a bit old fashioned :) I love the image of people taking turns to say what they are grateful for.

As for the meal, I'm making cooked food for my hubby and his friend, and I am having a raw spinach and apple soup with sprouts, some seeds, and lots of fuyu persimmons!

Wow! What a timely post. I was sent an invitation today to join the family of Gratitudelog.com, and for some reason, Wendi kept coming to mind while I was visiting the site. It is a wonderful site, where people from all over the world, come together and encourage each other in being grateful. Lovely, loving group of people over there. I just thought it might be helpful to Wendi at this time in her life. I know that I found it to be extreemly uplifting, and plan on visiting every day for my daily gratitude fix. Sending loving, healing energy and strength for the journey. xoxoxo Colleen

My thanks go to the Source of the universe and galaxies, the One who keeps everything in orbit so that we have the right climate to continue living on this earth..the One who breathed the breath of life into man and man became a living soul. He deserves all our praise.

And I thank you, Wendi and Jim, for a lot of inspiration in my process of becoming raw. You give lots of practical help.

Really appreciate the musings and ruminations. I am interested in how to help more people that struggle for food all the time...those numbers are growing, likely. Also---the idea of getting in touch with some homeless folks and sharing a thanks giving with them has great appeal---one of my bucket list items. Our security is tenuous at best, fraught with Maya. Being grateful that for today, I have more than enough. Sharing with kindred souls is a big part of that.