Every year my dear friend, Mamta, lets me know when Navratri is going to begin. ?It s the nine-day fast, but you don t have to change anything since you are already eating so healthy. Traditionally, Hindus used to abstain from eating during Navratri. In modern times, with everyone working and life being less relaxed, fasting isn t always something that can easily be accomplished. So, over the years Navratri has been modified by many to represent a time of eating more simply and abstaining from meat if you eat it.

This year, I had an email question from one of our readers who was asking about ways to eat simpler during the nine-days of fasting. After responding to him, it sparked in me a desire to do something this year for Navratri. I had read about eating mono meals and always thought it sounded like such a gentle way of cleansing the body, so I figured I d try it for the nine days of Navratri. To make it even easier on me, I decided to consume a different food every 24 yours, rather than eating the same thing for the full nine days. Maybe in the future I ll try that, but this time I wanted this to be as easily doable as possible.

So, I did it. I selected my foods (strawberries, pineapple, oranges, apples, cucumbers, celery, bananas, and tomatoes) and wrote about my mono meal adventure each day. When I was on my final food (apples) it was very difficult. I wanted to eat some gourmet raw foods, to have meal of multiple foods combined with salt and oil. I was strong, however, and continued eating only the apples. I ate my fill of them for dinner and told myself that I only had until dinner the following evening to complete the nine days, and I gave myself a little ?you can do it? talk.

Then I talked with Mamta. I wanted to let her know how well I was doing and that I couldn t wait for the nine days to be completed. ?But, it s Ram Nami today, Wendi! You must end your fast and eat some salty and oily foods! I forgot to call to let you know. I m so sorry. What !! It was kind of funny to me that every year when Mamta tells me it s Ram Nami, the end of the nine-day fast, it doesn t really mean all that much to me. This year, however, since I ve actually been observing the nine days in my own way, I would have rejoiced to hear that it was Ram Nami!

So, I could have eaten foods that entire day. However, it was already after dinner time and I didn t feel like preparing a complex raw meal. Mamta insisted that I consume something salty with some oil, however, so I prepared a salad with avocado, olive oil, salt, garlic powder, and lemon. It was divine!

It didn t all add up, however. I kept asking Mamta to explain, since it wasn t truly nine days if the fast was to end that day. She explained that it s a special reprieve, of sorts. The final day gets reduced, or taken away, but it still counts as a nine day fast. I still don t fully understand how it can count as nine days, when it was really eight, but if that s the way it s done then who am I to argue about it?

So, I ate the salad last night, after I had already had an apple dinner. The salad tasted amazing and I enjoyed every single bite! I felt well after eating it and I was pleased that the count-them-as-nine-but-they re-really-eight days were officially completed. When I went to sleep, I didn t like the feeling of still having food in my belly. It wasn t as comfortable as the prior evenings on only mono meals.

I woke off and on during the night, not able to sleep very well. At one point I felt a bit nauseous, and I breathed deeply trying to calm my belly a bit. In the morning I felt like my mouth was all pasty, or something. My sinuses were a little bit congested, but my face felt smoother than it did during the mono eating. Was that because the detoxing was slowed or halted, or was it because my body required something in the salad that I ate the night before? My eyes were less dry, but still not back to feeling normal.

I m still not hungry for breakfast. I have no idea what I ll eat when I do get hungry, either. For dinner this evening, however, I m still going to have the salad and beet pasta with alfredo sauce that I had planned on having. I m looking forward to it. After that, however, I think I have decided to keep a closer eye on how much fat I m consuming. My heart feels like it has to work harder after only that one fat-filled salad last night. While I was consuming the mono meals, I had a light feeling in my chest. If the fats are making that much of a difference, it s something I should really try to work on (since I have an MVR heart problem). Today I don t have that tremendously wonderful feeling of being able to truly breathe and fill my lungs with air like I was experiencing, and commenting about, during the mono meals.

Even though I didn t feel any dramatic differences while I was consuming the mono meals, now that I have eaten the salad last night, I can feel how much healthier I was while eating more simply. I ve ordered a new raw food recipe book that will help me concentrate on low-fat raw meals. I m not ready to completely give up complex recipes that include fats. However, after this experience I know that I am a little closer to cleaning my diet up even more. I m glad to have experienced mono food eating and I m sure I ll do it again and again in the future. It s a great way to simplify and allow the body to take a rest from breaking down complex meals.

Here's a pic of the beet pasta and alfredo sauce. It's not a great picture, but it was unbelievably delicous! I ate half of it yesterday and the other half today. Yum! I'll post the recipe, soon, for anyone who might want to try it. ;-) 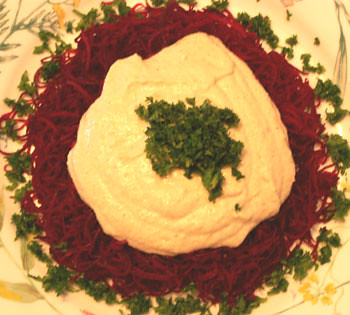 I am so glad that your mono-meals went so well. I would love to try monomeals, but I am afraid I won't be getting enough nutrients. Maybe I could try one a day with other meals? It's something I already do though, I suppose. I mean, doesn't everyone snack on just one thing at a time? I eat enough fruit in one sitting to constitute as a meal!

Wendi...I have enjoyed reading about your fasting journey with mono meals. It was a great time to rest your digestive track and honor Navratri. I am sure your body appreciated the less complicated meals for a time. I DO want that recipe for the beet fettuccine. Your presentation looks beautiful, very professionally done! You are a such a super star!

My body definitely appreciated the less complicated meals, especially the lower fat intake. Now, I notice how awful I feel after eating a lot of nuts and salts. Before the mono meals, I knew I didn't feel as great after fats, but I never realized how much better I truly feel when I'm not eating high fat. I'm happy for the experience, because it moves me closer to being even healthier one day.

Thanks for the comment. You are so sweet to me, Penni! :-D