Jim here... Since we posted Wendi's two-part series on pasta-making techniques (part 1, part 2) last week, I thought I'd follow up with an additional novel use for the spiralizer -- super-delicious, blazingly fast, ultra-low-fat sweet potato chips! We've done some really great things with sweet potatoes before. (Anyone signed up as a member of the Pure Jeevan family has likely already received our prized sweet potato pancake recipe.) But, these chips are amazing because they satisfy that unmistakable urge for crunchy, healthy snacks -- and in record time. Friends, if you have a dehydrator and sweet potato on hand, you could literally be enjoying these things in under three hours. So let's get going!

As Wendi demonstrated in the videos last week, you can easily make "rounds" using the spiralizer by simply making a vertical slice throughout your vegetable prior to placing it on the spiralizer. So, if we were looking down at the sweet potato, the cut (which goes all the way down the length of the vegetable) would look like this: 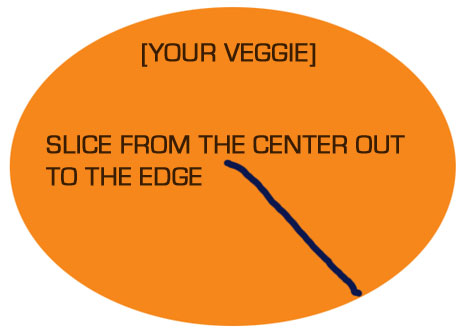 You would then place the sweet potato onto the spiralizer, making sure the angel hair attachment is not engaged, and start cranking away. The spiralizer makes chip-perfect rounds -- ultra thin pieces that dry in no time. Here's a pic of our dehydrator tray after less than two hours in: 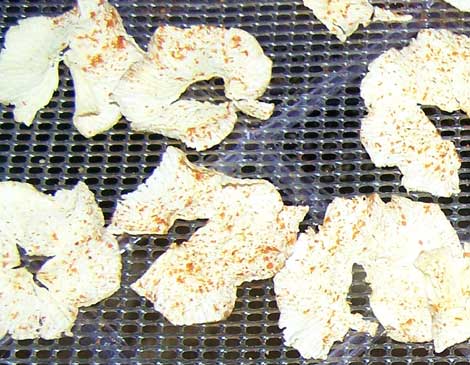 As you can see, I'd coated mine today with straight cayenne pepper (in addition to a nice sprinkling with salt). (Sometimes I like that blow-your-head-off sensation.) You might also try chili powder, Old Bay seasoning, paprika, or just plain old salt. (Believe it or not, I tried using just cinnamon on a few trays, just to see what they turn out like. You never know... I'll post an update with the result of that experiment tomorrow.)

Because I wanted to keep these chips low-fat, I did not coat them first in olive oil. However, if low-fat is not a concern for you, you might try mixing your chips in with some olive oil prior to laying them out on your dehydrator trays. This may help the salt and flavorings stick to the chips a bit better. After just two hours in "the D" (set at 105 degrees), my chips were done and crunchy! Here's a pic of two trays poured into a bowl. I pulled a few of the full rounds out in front so you can see how the better-looking ones turn out. (You'll also get some crumbs and smaller ones, as not every round turns out perfectly.) 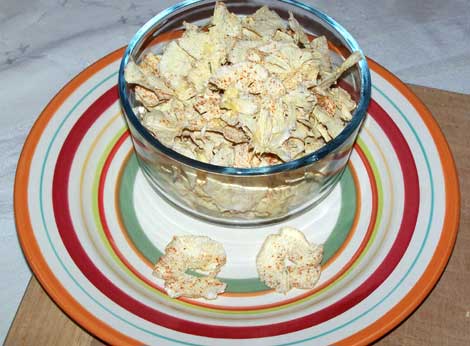 These sweet potato chips are packed with Vitamin A, B6, pantothenic acid, and other nutritional goodness. So, don't forget about your spiralizer for fast, super-healthy snacks. Oh, and if you don't yet have a spiralizer, don't forget that you can get one easily by visiting our friends at Natural Zing. Just make sure to use this link -- http://tinyurl.com/NaturalZing -- which helps support Pure Jeevan as well!

LOL. In time, you'll have all of the equipment -- juicer, dehydrator, etc.

My "D" has been lonely lately so I think I'll take it out for a spin and make these chips.
Thanks so much.
You guys rock!!

Our D gets lonely, too. We seem to do our dehydrating in periodic bursts -- a lot for a while, and then nothing for a long time. T'is the nature of owning a D.

My hubby keeps asking me for sweet potatoes now I have the perfect fix!
Love it!

Awesome! He'll love these. They're *very* snackable (easy to over-eat, actually, because they're so delicious). -Jim

I was inspired and now my sweet potato chips are dehydrating. I used a good vegetable peeler (Oxo) to make paper-thin slices lengthwise on the potato, and this seems to work just as well. (The last un-sliceable bits will get blended into a soup tonight.)

"Sometimes I like that blow-your-head-off sensation." LOL. Yeah. I've been using cayenne as my main spice in cuisine (when it was the only permitted seasoning on a juice fasting retreat, I think I used up half of the group's container -- I never season my juice otherwise, but I needed my fix! :P). One of my non-raw holdouts has still been hot sauce -- you know, the kind with skulls and flames on the label, various synonyms for "crazy" in the title, and warnings to keep away from children and mucous membranes. ^_^ I tell myself it tones the digestive system....

I'm so happy you tried it! What did you think

We love spicy, flavorful food here in our home. The longer we're raw, however, I notice that we are preferring less and less spices.

Thanks for your comment. I hope you'll let us know what you thought of the chips!