(Today s ?My Raw Story? is also a special installment for our

My name is Zee Charnoe. I am a physicist. I was first diagnosed with Type II Diabetes in 1990. In April of 2007, I was hospitalized with pneumonia. At that time, the hospital staff began using insulin. I continued to escalate the dosage of insulin, until I reached 195 units, of two types of insulin (Novorapid and Lantus), per day, in 5 injections.

About 4 months ago, it was established that my kidneys were failing. We began making preparations for dialysis and for a kidney transplant. 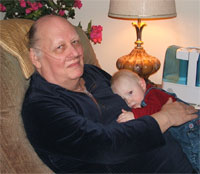 I have had two heart attacks. The first one occurred in July, 2005. The second one occurred in September, 2008. When I had my first heart attack, I began to use home oxygen, 24 hours a day, 7 days a week, at about 4 litres per minute. I still am on that dosage, but I breathe more easily.

Approximately 4 months ago, I used CPAP, at night, to assist with sleep apnea. My renal specialist advised me to have my laboratory blood tests in one particular arm, my right arm, to begin to prepare for the surgical implant of a fistula, in my left arm, for dialysis.

During my earliest attempts to manage diabetes, I used alpha-lipoic acid, which has an effect on the body for only about 3 hours. So, I tended to take one capsule every three hours. I also used L-carnitine, L-taurine, zinc, B50 complex, Vitamin E (both the tocopherols and the tocotrienols), Vitamin D, acidophilus, Klamath lake blue-green algae, selenium, calcium-magnesium, Vitamin C, Co-enzyme Q10, beta-carotene, and a number of other supplements and herbal mixtures.

I took a daily dose of Essential Fatty Acids (EFA s), with poached eggs, in the form of Udo s Choice Oil. This affected membrane health, in all cells and all organelles within cells, and contributed to cell ?fluidity . EFA s are also the source of all of the Prostaglandins. There are about 30 Prostaglandins, which serve as short-lived, highly local hormones, regulating cell metabolism. Our total daily intake of EFA s should be about 15 ? 20 % of the total caloric intake.

About 132 days ago, we had located an Ayurvedic healer. We began learning from the book, by Dr. Gabriel Cousens, M.D.: There Is A Cure For Diabetes, which I read. Dr. Cousens references a book by Dr. Joel Fuhrman, M.D., Eat To Live, which I also read. My finding is that you learn a little, and refine your practices, then you learn more, and refine them further.

One of the more important themes that we discovered was to ingest foods that had high nutrient density, a high number of nutrients per calorie. Examples of these high nutrient dense foods are: kale, Swiss chard, spinach, bok choy, romaine lettuce, eggplant. There are many others, referenced in Dr. Fuhrman s book, Eat To Live.

Quite soon, I learned that the intake of sugar (sucrose), which breaks down into glucose and fructose, on contact with your saliva, and the use of insulin, have an array of effects in your body. One of these effects is glycosylation. You can learn about glycosylation, in the book by Dr. Gabriel Cousens.

There is a large consensus, on the part of the medical people pioneering high density nutritional intake: pharmaceutical medications are toxic!

We saturate our immune system by virtue of the kind of culture of self gratification and the propagation of profitable food production. This overwhelming of our immune system is given greater capacity by means of the fat cells in our body. These fat cells become the repository for the overload upon the immune system, created by our under-informed eating practices. The fat cell can enlarge by about 2.4 times.

It is well known, by some, that shelf life and distribution of food involves the use of many toxic substances i.e. the resin in some cans that produce psychotic behaviour, in some people with an allergic response, the dimming of one s cognitive capacities, by means of sugar (sucrose), colouring, flavouring and preservatives.

I was born in 1935. That makes me 73 years old as I report this. I have an education in Life Sciences, more particularly, in biophysics. Since I commenced the deliberate dietary regiment, 132 days ago, I have lost 77 pounds. The first thing that went with the loss of weight:

The second thing was the ceasing of the use of the CPAP equipment, for sleeping at night. I diminished my intake of medications, including insulin. And my blood pressure dropped. This was beneficial to my kidneys. My laboratory reports began showing that my blood sugar levels had normalized. And my creatinine level had dropped.

When I first introduced what I intended to do to my family physician, she was distressed and concerned that I was taking an untried treatment and putting my life at risk. The last time I saw her, she was delighted. She hugged me and kissed me. She wanted to know the names of the books that I had consulted.

During this era of extensive and rapid weight loss, I have experienced an excessive amount of phlegm. In most recent weeks, I have had patches of blistery secretions on my leg, on my elbow and on my buttocks. These turned into itchy, scaly, uncomfortable, red zones, that were treated by community care nurses, twice a week. I was discharged from the nursing care today. There still remains a very slight pinkish, scaly patch on my buttocks, on my leg, and to a lesser extent on my elbow, but I am much more comfortable. And the diminishing of the neuropathy on my feet is now so slight, that I can stand and walk with comparative ease.

I have begun to sleep deeply, to dream regularly, and to have pleasant and welcome dreams. I take 5-HTP (5-hydroxtryptophan) and melatonin, each night. My cognitive capacities, my memory, and my mental performance has become progressively better and better.

I regard this whole undertaking as a piece of frontier exploration, undertaken despite most medical advice, that has yielded the most precious dividends for which one could hope.

This account is meant to be some trail-blazing. No one needs to duplicate my mistakes. Please make new ones, and report to me the benefit of your explorations!

Do not eat white flour products. Eat fruit, don t drink fruit juices. You may benefit if you have any emotional or mental upset, if you read the book by professor George Watson: Nutrition and Your Mind, or the book by Dr. Richard Mackarness, a doctor and a psychiatrist: Not All In Your Mind, or the methodical work of Dr. Rudolf Wiley, Ph.D.: Biobalance I and Biobalance II.

I have kept a methodical health log for many years, that records: blood pressure, blood sugar, insulin intake, temperature, body weight, and the pH of my saliva and sometimes the pH of my urine and any additional notes on my health, for each day.

That provides the commencing markings of my exploration and discoveries. I would be pleased to provide further detail and more explanation, when or if someone wants to explore this same pursuit of health and high level cognitive functioning.

Weight loss is neither the only significant change or the most important significant change that has occured with the high nutrient density diet that we have followed. Fat cells can increase to 2.4 times their incipient size, due to their function in the immune system as the holder of toxins, when there is an overdemand on the immune system's processing. If, and as, one commences extensive or high rate weight loss, simultaneously, one must arm the immune system, to cope with the increased demand from the toxins being released, from the diminished size or the elimination of fat cells. The eliminatory ablative discharge shows itself in the nitrogenous waste, in the urine, partly, in the kind of protein being broken down, and discharged, in the urine, and in the carbon dioxide levels in the blood, from the high rate of cell respiration required for the processing, and frankly, in the uncomfortable, if not distressing elimination through the bowels and through the skin.

At this point, I cannot trust the knowledge base, nor the paradigm of a medical practitioner, who operates under the paradigm of problem - remedy treatment of the pathology versus systemic physiology, with respect to the patient. Repeatedly, I have encountered physicians who do not have the knowledge base, the care, the concern, nor the compassion, to treat the patient. This is a serious problem in propagating or advocating the use of high nutrient density diets.

I have lengthened my life and I have enhanced my functional and operational abilities e.g. memory and cognitive performance, as well as mobility.

You can find out more about Zee Charnoe by visiting the following links:

What an inspirational story. Thanks so much for sharing

How wonderful and inspiring! I wish you many more years of excellent health!

Zee, what a turnaround! Thank you for sharing your story. ;) Blessings!

Your Raw story should be front page news in all newspapers around the world.
happy healthy energy always

OK for folks who do not understand what I am saying - I don't want to be sued when someone thinks I am telling them what NOT to do! But for me and my house, we're abstaining from medical people who do not care, have no concern, and do not know more than us NOW on how to take care of our bodies. We've abdicated that paradigm!

A local MD to us, in a group practice, couldn't even bother to call my husband in another "necessary" prescription of beta blockers when the pharmaceutical company ran out and had both the label and generic pills on back order to all pharmacies three months ago (maybe they laid off too many people who knows !) but everyone around us kept saying "oh you can't miss a day of your beta blockers" yet my husbands MD office couldn't get another prescription to him. We found out later his doctor had been away on vacation! But this was all meant to happen because it got my husbands attention to the fact that they don't care. And since we'd been graced to have met another acupuncture physician (my former one had left the area) well, hubby decided on his own, to make an appointment, go there for treatment, get off all caffeine, go gluten-free, drop alcohol, etc. It was a dramatic change but he didn't stroke out, or have a heart event (as so many people had suggested he might have).

I proud of you Zee, and I'm very proud of my hubby, for acknowledging what your body needs, and what it doesn't. Woo-hoo!!! Happy, happy, joy, joy!!!
sheila
mindxdreamz.com
Survivor of 5 asthma / allergy meds and asthma shots that didn't work!

I am so glad for your health recovery Zee, and for your sharing it!