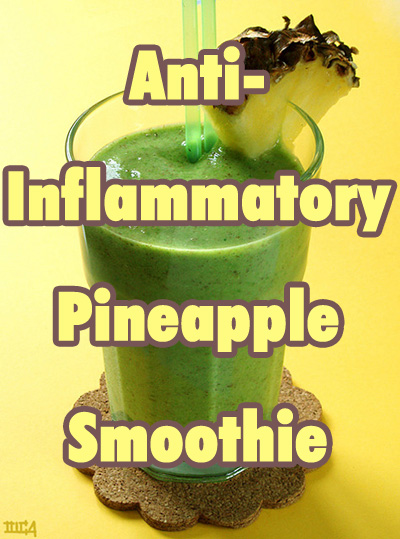 Who's been making small changes and feeling a bit brighter lately, since we've been talking about brain health? Today, let's continue focusing on some things we can actively do to minimize our chances of developing memory problems like Dementia or Alzheimer's in the future.

Yesterday we focused on heart-healthy tips to increase brain function (since heart disease seems to be linked with Alzheimer's) and I shared a heart-healthy recipe with you. Today, we'll focus on inflammation.

While research isn't clear yet on the causes of brain function deterioration, inflammation is almost always found in the bodies and brains of those suffering from memory loss. Studies haven't concluded whether the inflammation is secondary to the disease, or a direct cause of it. Regardless, inflammation can exacerbate problems in the body (whether in the brain, or otherwise). So, it's best to control inflammation in the body as best as we can.

There have been some preliminary studies showing that anti-inflammatory foods, such as the turmeric spice, have been effective in preventing brain damage. Inflammation, which is always found in those with early stage memory loss, is something that can be easily controlled through diet. By avoiding certain foods and incorporating a steady supply of others, it can be relatively easy to eliminate inflammation in the body.

It's important to note that inflammation is almost always a result of some other issue. In many cases, when we look at diet, consuming certain foods can produce an inflammatory response. In those instances, it's best to avoid those specific foods. In other cases, there are underlying problems in the body and an inflammatory response is sometimes triggered.

With inflammation there is heat, swelling, and pain (just think about what happens after accidentally smashing a finger or toe). In isolated incidences like a smashed toe or finger, the inflammation is going to eventually fade and that body part will return to health. However, when the inflammation is wide-spread through the body, and chronic in nature, it's a sign that something major is going on. Finding the root of the problem is vitally important, of course.

Many individuals who suffer with ongoing inflammation find relief when they change their diets. It's proven that certain foods definitely contain either pro- or anti-inflammatory properties. Avoiding the former and incorporating more of the latter in one's diet can bring about tremendous benefits (both overall in the body, but also in the brain if there is any inflammation present there, as well).

Here's a list of some foods that cause inflammation and others that eliminate it.

To minimize the chances of developing memory problems, eliminate as many inflammation-causing foods and incorporate as many anti-inflammatory foods as possible. The following recipe not only reduces inflammation, it is also delicious and super easy to prepare!

Remove outer skin of pineapple. If you have a Vitamix, or similar high-powered blender, you can simply chop the pineapple into large chunks and drop into the Vitamix container. Use the tamper to force the chunks down into the blades as it blends into a smoothie.

If you are using a standard blender, you'll need to remove the core of the pineapple (since it won't blend well), and also cut the pineapple into small chunks (and you'll need to slowly add the pinapple pieces to your blender, so they can process). You may need to add some water to the container, as well, if it's not blending for you.

Blend the pineapple chunks and then add a few handfuls of spinach to the mix and blend a bit longer. You can also add a little bit of ice, if desired, to create a colder smoothie. This is so easy and so delicious!

Looking for info on iron and Vit B 12.

I have been a vegetarian for 3 years and green smoothies salads and fresh fruit for most meals with some cooked foods.

My iron levels were low at Ferritin at 7 now building up to a 14 through liquid iron supplements and nettle tea, but now at the Dr's suggestion that I have Ferro Gradumet -iron tablet everyday till Septemeber and currently going through the process of finding where I am at with my B12 levels.

I just wanted to get some other people's idea /suggestion as what you guys think!

My iron and B12 levels run low, also. For my body, it's because my digestion isn't working fully. I don't do the iron tablets, because they make me feel unwell. If you want a supplement, check out what Dr. Cousens suggests since he does a lot of research. If you still need help, let me know. :-)