Exercise As a Reminder of the Human Body's Amazing Efficiency 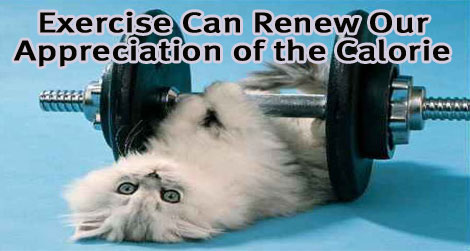 Jim here... As I may have mentioned a while ago, I joined a gym recently. I figured, with Wendi and Bailey living on the other side of the country, I might as well find something healthy to do with my alone time until I'm able to join them soon (aside from my seemingly never-ending quest to rid our household of 13 years of rampant accumulation). I joined on a whim, actually. There's a gym near my home called Planet Fitness. Honestly, I have no idea how they make money. A membership costs just $10/month -- and it's a Wal-Mart-sized place, too, absolutely packed with state of the art machines. (Actually, it's a franchise, so there could very well be one near you.)

In any case, it had been a while since I'd been inside an actual gym. I've certainly remained relatively active, of course. But being in a gym is a little different -- and certainly has its plusses and minuses. On the minus side, I've always kind of felt that, if you add up all of the time it generally takes to get (1) get ready to go to a gym, (2) drive there, and (3) drive home -- say, a half-hour, total, for those things -- then you could probably better invest that time in just going for a run for a half-hour, leaving straight from your home. From a time management standpoint, I'm not crazy about gym memberships (meaning not that physical exercise isn't worth the investment of time, but rather that there are ways to accomplish the same results in much less time). 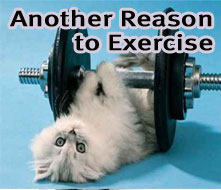 But, again, there are certainly plus-sides, as well. One major one, for me, is that gyms are heated. Ever try running in the snow I used to be able to do that before going raw. But, once I lost the weight, I lost almost all of my tolerance for cold weather.

Another cool thing, though, is that gyms have some really great equipment these days. Would you believe that this month (October 2010) was the first time I'd ever tried out an elliptical trainer? Wow, they're SO neat -- so unpainfully easy on the knees (an area of my personal physique that, at least according to my astrology charts, will always be a challenge for me and other Capricorns). If you've ever stayed away from a gym, or from exercise, because of knee trouble, definitely look into one of these machines!

What I like best about the elliptical trainer machines at my gym is the "calorie burn" display, which I find far more interesting than the 25 big-screen plasma televisions hanging overhead. Let me tell you, this little digital window offers a true appreciation for how much exercise it takes to burn off a calorie. As far as I can tell... If you're jogging along the road at a nice, normal jog, then you're burning about 10 calories per minute. So, a 10-minute jog burns off about a banana (or, for any non-raw readers, about 8 peanut M&Ms). That's both super-impressive (a single banana powering a human being for roughly a whole mile), and also a little scary. ?It does a lot to explain why the SAD-diet produces the results that it does -- way too many calories, and the wrong kind as well.

As a raw foodist, I don't like to get overly hung up on calorie counting. I personally believe that, if you're eating a pretty high percentage of raw foods (with the balance devoid of junky foods) and are taking in a decent varietal array of fruits, vegetables, nuts, and seeds, then ?your calorie count will be more than sufficient -- or, rather, it will be when you find the optimal balance of these things for your constitution.

My own preference these days is for a lower-fat model of a high-raw diet. But, again, that's just what works for me at the moment. In any case, the point here is not to launch a discussion of calorie counting or calorie restriction; rather, it's simply to appreciate the amount of energy in a single calorie. Think of how far you can jog in, say, 5 seconds. Even at a relaxed pace, it's pretty far -- and yet that represents just one calorie!

One final observation... Gyms seem far less social to me than they did back when I was in college and soon thereafter (1990s). Mainly, I attribute this to the widespread use of personal MP3 players. These days, each person exists within their own little world of sound. I'm not being critical, though -- just observing the cultural change. When I began college, our gym was crammed into an old stable behind one of the many coal baron mansions that the school had inherited. The entertainment was nothing more than a small, crappy radio. I guess that forced us to speak to one another from time to time. Now, if you'll excuse me, I have to attend to my own MP3 player.

Yeah, even better yet is having all the stuff in your basement; just tumble down the steps and start moving various parts of your body - couldn't be easier. We finally sprung for an elliptical machine on sale at Sears; it has held up nicely to almost daily use. However a couple of our favorites are the Nordic skier and the rebounder. They sell cheapo mini trampolines at some sporting goods places, but they're terrible compared to the better ones (Needak or ReboundAir, for instance); we started off with a cheapy and it actually hurt Patty's foot (operated on recently) as opposed to making it feel better like the better one did. I have a chest-high shelf beside the skier and have a computer monitor positioned so that I can read Gutenberg Project downloaded books while I "ski" - after 1 hour going 6 miles/hour, I hardly know I was exercising. As much as I hate exercising, this arrangement has kept me at it for over 15-20 years steady, and I can honestly say, combined with a high raw diet, I'm in better shape at 66 than I've ever been in my entire life. Patty's got me beat by including Pilates and an exercise ball as well as free weights (I'm much nicer to her now!)

I never thought i'd be able to brave the cold and exercise outside during the winter, but lately i've been doing my 7 mile jogs even if it's literally freezing outside. Snow and rain though....hmmm that might be a different story. I used to have a gym membership for the winter, but didn't like the atmosphere and the money it cost. $10 dollars a month though is really good, you're lucky to have that. Now i have a rebounder in my house, so i can at least get some cardio going when it's just too crummy outside to run.